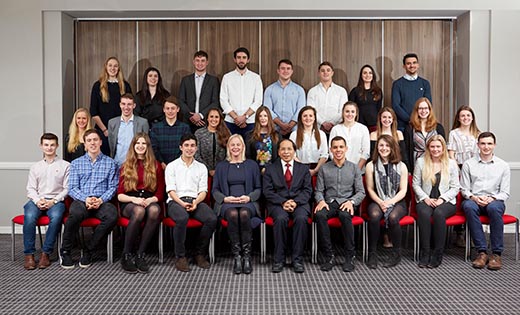 More than 60 students from a range of academic schools studying everything from Medicine and Surgery to Engineering have been awarded sport scholarships. These scholarships support them in their athletic and academic ventures, enabling them to perform at their highest sporting ability alongside their studies.

The evening also celebrated two students, Kim Daybell and Tyler Smith, who are preparing to fly to the Gold Coast 2018 Commonwealth Games next month. Kim will be representing England in Table Tennis and Tyler will be representing Bermuda in Triathlon, a fantastic achievement made possible by their commitment to their sports, as well as their academic schools having the flexibility to allow them to go and compete.

“It was a great celebratory event of our gifted and talented sport scholars, made extra special this year being able to wish both Tyler and Kim good luck for their endeavours at the Commonwealth Games on the Gold Coast. It seemed so fitting to be hosted by our Pro-Vice-Chancellor for International Relations, Professor Yu, who was a very welcome guest and spoke eloquently about how proud the University is of our sporting scholars as they represent us across the world in the sporting arena.”

The sport scholarship programme at the University provides our scholars with a bespoke package of support that meets each individual’s needs. Every athlete is given a personal mentor who helps ensure that a healthy balance between University work and sporting success is achieved. Our scholars are also supported with free Edge access, physiotherapy and a personalised strength and conditioning programme as well as a bespoke bursary to help ensure they can meet the financial demands of performance sport.

Read more about our sport scholars.

Read Professor Hai-Sui Yu’s Inside track in which he outlines how we plan to achieve our international strategy objectives.

Students vote Leeds as third in the UK in the Times Higher Education Student Experience Survey 2018. Read this story.

The 2018 Leeds Sports Awards was a big day for sport in Leeds as the city celebrated the achievements of athletes, coaches and sports volunteers in 2017.

Alumni, current students and honorary degree holders were nominated across a range of categories.

One of the biggest successes of the evening was the nomination and win from our Rugby League and American Football teams. They beat off fierce competition from Leeds Beckett University Hockey to jointly win the ‘Student Sport Award’ for their hard work on the ‘It’s ok not to be ok’ campaign, highlighting the positive power of sport. 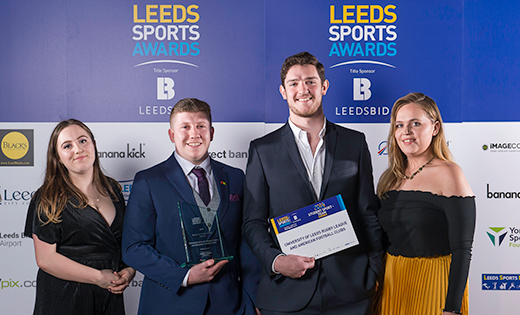 "It has been an absolute privilege to get to know and work alongside Andrew and Aaron on the it’s OK not be OK campaign. It was amazing to see all of the hard work and fundraising efforts from both clubs recognised when they won this award. This campaign has increased the awareness of male mental health in particular and raised money for two very special charities, and alongside celebrating this success we must keep working hard to tackle this because it is OK not to be OK."

Read more about our winners on the Sport & Physical Activity website.