The Institute of Physics (first ever) Physics technicians meeting.

On Wednesday 7th March 2018 the Institute of Physics (IOP) held a bespoke Physics Technicians event at the University of Nottingham. 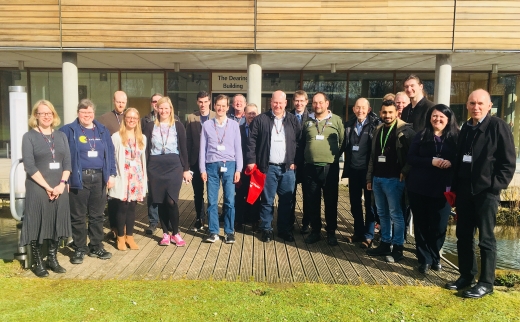 The IOP are supporters of the Technician Commitment and are keen to increase engagement with the technical community across universities and research institutes. Apparently, this meeting was the first time in their 144-year history that they’d ever held an event specifically for technicians. The aim at the end was to ask us what exactly do technicians want out of IOP membership and what can they do to support us?

The meeting started at 11:30am with a keynote talk from David Wilkinson (Visiting Fellow in the Faculty of Science and Technology at Nottingham Trent University) about “Physics = worldgood”. He spoke to us about his varied technical career. Part of which included working for the Home Office Scientific Development Branch. During his time there he helped develop a technique called Drug Identification using Low Angle X-ray scattering (DILAX).

This was specifically designed to detect illegal drugs entering the UK via airport parcel cargo. Previous to DILAX, the thousands of cargo parcels passing through airports every day had limited checks being performed by a small team of people and a sniffer dog. With DILAX, the number of parcels able to be checked has increased greatly (and swiftly) and has helped reduce the number of illegal drugs being imported into this country.

After lunch there was a consultative workshop where the IOP asked those attending what we wanted out of our membership from the IOP; is there anything they could improve on and what support should they offer? After some discussion we came up with a number of suggestions. Amongst other things we suggested the following:

I felt that the IOP were keen to hear from us and this was a great opportunity to influence and shape the technician related initiatives within the Institute.

RT @UniversityLeeds: Investment company @NorthGritstone, co-founded by the University alongside @OfficialUoM and @sheffielduni, has announc…

Have you entered our exciting new awards scheme? Prizes, funding and an invitation to a special awards ceremony a… t.co/VoJH7J7jKb