Jackie Hudson:<br>a technician under the microscope

Excited by science as a school girl, Jackie started out as a trainee technician and will end her career in April 2019 as a technical specialist in high resolution microscopy and laboratory manager. 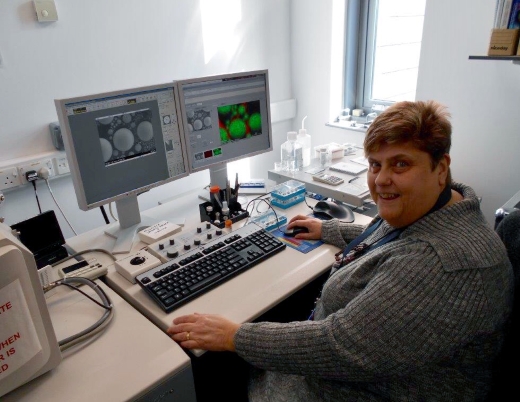 This is her #Technician Journey.

When I was eleven, my mum and dad bought me a chemistry set. One of the first things I did – after setting fire to Mum’s lino - was to mix a few logwood chips with water in a test tube and boil it up. I didn’t realise at the time but the pleasing purple colour produced was a chemical I would spend a significant part of my life working with - haematoxylin. It is one of the most common chemicals used for colouring cells when studying them under the microscope. They also bought me a microscope and I would spend hours making up experiments and writing them up.

My parents encouraged my scientific investigations, but school in the 1970s was not a great place for a girl interested in science. I remember going to see Mr Holden, our careers adviser; he was a strange guy. He called every boy Jonathan and every girl Geraldine. At that particular point I was keen to teach chemistry. However, I remember him saying to me, “Oh no dear, I will get you an interview to go work at Morrisons to work as a shelf filler.” Even worse, it was a secondary modern school and girls couldn’t even take all three sciences; you had to take either domestic science or needlework instead.

I took domestic science because I loved cooking but that meant I had to drop biology. Luckily, a few of us got quite friendly with the school’s lab technician and we used to spend quite a lot of time out of hours working with her, running experiments. She’d studied biomedical science at Leeds Polytechnic and had worked in the NHS until she had children and decided to become a school technician instead.

Our school would only let us take CSEs and the highest grade you could get was equivalent to a grade C O-level. I wanted more, so I stayed on an extra year to convert from CSEs to O-levels. Then, in 1976, within six weeks of getting my O-level results, I got a job at the University of Leeds as a trainee technician in the School of Dentistry in Oral Pathology. The job combined teaching support with a clinical role preparing diagnostic samples for pathologists. You spent four days in the lab and then on the fifth day you attended college on part time day release. This was a very, very long day, 9 o’clock in the morning to 9 o’clock at night, doing all the theoretical stuff and practical sessions.

Part time day release was a fantastic way to learn. We covered lots of subjects including microbiology, biochemistry, and haematology, giving us the option to specialise in different areas. I always knew I wanted to do histology. I think that was the artist in me because I loved looking at stained cells under the microscope. We were taught our specialist area by experienced laboratory technicians from the NHS too so learnt lots from them that you did not find in text books.

The training should have taken four years but took me five because my dad died when I was taking my final exams and I completely messed them up. When I got my results and found I’d failed, the first thing I said was, “I’m not going back to college.” I was really lucky that Peter Hart, the chief technician in dental surgery, took me and a friend who had also failed to the old staff social club and convinced us to go back to college over a couple of Bacardi and cokes.

I was glad I did because I became a State Registered Biomedical Scientist in Histopathology at the University. I split my time between clinical work and teaching support: we might be staining cells on slides for histology or pathology one day and preparing teaching materials and putting out microscopes the next. About a year after I qualified, in 1984, we had a new head of department who wanted a technician to do some electron microscopy. None of the other technicians wanted to do it so I volunteered. This meant I was doing research as well as doing the clinical work and teaching support. I had to teach myself on the electron microscopes. There was a Royal Microscopical course but it cost around £1,000 and when I asked if I could attend the course I was told to “go home and have a family.”

During my training I had joined the Territorial Army (TA). I had bumped into a couple of old schoolmates one summer’s evening in 1978 and I asked where they were going. It turned out that they were going to Harewood Barracks to join the Signals Corps. I went with them but when the recruiter discovered I was a lab technician they sent me to the field hospital next door. Again, being female was an issue as they didn’t allow girls to be technicians. Instead, I became a medical assistant, and later a non-commissioned officer. After five years I had to come out for family reasons, but my time in the TA gave me a good grounding in leadership and management. I was responsible for a squad of thirty people, their welfare, day to day health and safety, weekend training, and things like that. Unfortunately, the department back at the university didn’t seem to understand the skills the TA had given me…it was very frustrating.

The next 17 years I stayed at the same grade doing the same job. It was very comfortable - do the work and then go home - but there was always something niggling underneath. Something that said, ‘I think I can do more than this’. Then, in 2001, everything changed. During a restructure in the school I transferred from dental surgery to oral biology. The move was terrible physically and psychologically as we moved from being on the outside of the building with lots of daylight to the bottom of the Worsley building in the dark. However, the move was excellent for my career as we got a new Head of School, Professor Jennifer Kirkham.

Jen Kirkham has given me a lot of opportunities and support over the years which built my confidence. One of the first things she did was pay for me to do that microscopy course. It was like the mist had been lifted. It helped me understand what I was doing and how to problem-solve. Jen asked me to get the histology lab and the electron microscopes moving again. At first I thought, ‘I cannot do this, she’s asking too much - I cannot do this’, but she’s been really supportive. I am now the imaging suite laboratory manager for the School and also the Departmental Laboratory Manager, managing a small group of staff. In 2010 I co-led on a bid for a new scanning electron microscope which we bought and last year I took the lead on the purchase of the replacement for our ageing confocal microscope for the School; I’d never have believed I could take the lead in purchasing capital equipment. I have to give a lot of thanks to Jen Kirkham because she has been the kind of manager who encourages people to develop themselves.

Moving to oral biology also meant moving away from clinical work, so I had more opportunities to get involved in research. I now get to work with interesting people from all over the world and teach them all the practical skills of microscopy, which is where I really wanted to be. It is a multidisciplinary environment - I work with biologists, material scientists, physicists, engineers, and chemists; not forgetting Dentists too.

Things got even better when, in 2014, we moved to St James’s Hospital and into offices and labs with daylight! The labs are fantastic to work in. Not everything made the move to St James. We had an old Phillips 400 TEM which was built the same year I started work. It was a beast of a machine and a nightmare to align and was deemed to be obsolete so had to be scrapped. That made me feel old!

Alongside my work in the lab I work with a lot of the local schools offering placements for work experience and I go into schools to teach them about careers in biomedical sciences in the NHS and careers as a university technician. I’m going to keep doing that when I’m retired. I am really inspired in this work by one of my ancestors who was the first student recorded at Leeds University when it was the Yorkshire college. He was a miner called Shadrach Stevenson from Rothwell and in 1874 he arrived with nothing. After finishing his course at the college he became a teacher, a mine manager, and a lay preacher. He developed his miners, teaching them to read and write. His success reminds me that universities should be open for everyone.

I can’t believe 42 years have passed - it’s absolutely mad. To be in the same school, in two departments, but the same school for 42 years…it’s quite an achievement these days. I love my role supporting academics and students with their research. There’s no more pleasure than when the students get their PhDs. You look at the front of their thesis and it’ll say in the acknowledgements something like, “Thanks to Jackie who provided all the training in the technical area of this work”. All the training I have provided to researchers from all over the world, and the book of Jackie’s handy hints and tips I am writing, will mean hopefully that my knowledge will not be lost. Whatever happens, it’s been a great career.