The future's bright- the future’s PURPLE!

You may have noticed this winter the purple lights in the Plant Growth Suite greenhouses on the side of the Manton building. 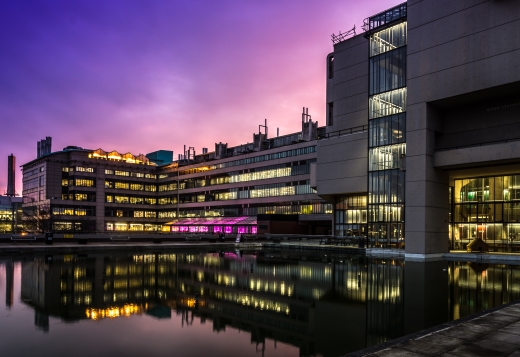 Even the Vice-Chancellor has commented on them. He says he can see them from his office. This is our latest installation of LED (Light Emitting Diode) lighting which was completed before Christmas.

We have been experimenting with LED lighting in plant growth for about 5 years now but recent technological advances and available funding have given us the opportunity to expand our small scale trials to a full blown installation in 8 greenhouses, costing around £70K.

Because of the potential energy saving, people have been trying to grow plants under LED lighting for more than 10 years but they were never quite good enough, not having the correct spectrum and intensity needed. It is only in last few years that high intensity lights have been developed with plant growth in mind. Now all the major lighting manufacturers are introducing LED grow lights into commercial crop growing and research greenhouses.

Many of these new LED lights are a mixture of red and blue which gives the greenhouses this distinct purple/pink glow. These colours are chosen because plants readily absorb light within these regions of the spectrum, making the lights more energy efficient and leading to better plant growth. We are noticing that the plants grow differently and we are having to learn how to use the lights but so far the results are looking good.

In our earlier trials we noticed more dry weight with shorter internodes (the distance along the stem between the leaves or buds) and thicker leaves in plants that grow under LED lighting. In short, better plants. We are now noticing that the plants grown for research are taking longer to reach maturity. This is likely to be due to a combination of lower heat output from the LED lights compared to the old sodium lamps, resulting in a cooler environment. There is also probably an effect from the reduction of long-wave radiation. Sodium lamps emit more long-wave radiation than LEDs which results in a higher leaf temperature and quicker growth. 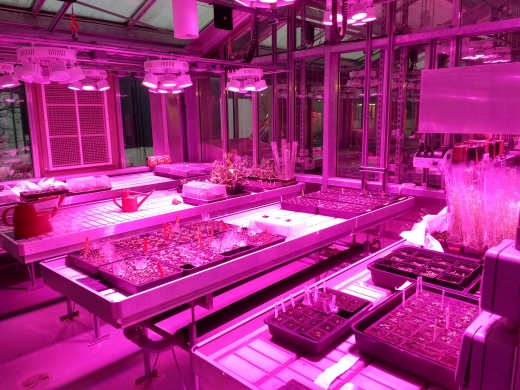 Plants growing under the LED lights

It’s a bit strange working under these lights for any length of time and when you leave the glasshouses everything outside looks green! Some people find this a bit strange so we are experimenting with orange tinted glasses to make the effect less disorientating.

The lights were paid for from the University sustainability budget. Although the initial outlay was high, the lights will pay for themselves in just a few years and the amount of carbon emissions they are saving is enormous. Each PGS greenhouse (under the old sodium lights) used to use more than £20K worth of electricity a year. The majority of this cost was to cool down the sodium lights which gave out lots of heat, that in turn had to be got rid of through energy-hungry air-conditioning. The new LED lights produce less than half the heat as well as being 60% more efficient in producing a better quality of light with a very high intensity.

We still have a lot of our plant growth under fluorescent tubes in other parts of the Plant Growth Suite but it is very likely that all our plant growth facilities will use LED’s in future.