That Eureka! moment for researchers

Exciting plans are being developed for Leeds to explore pioneering projects with a network of leading museums. 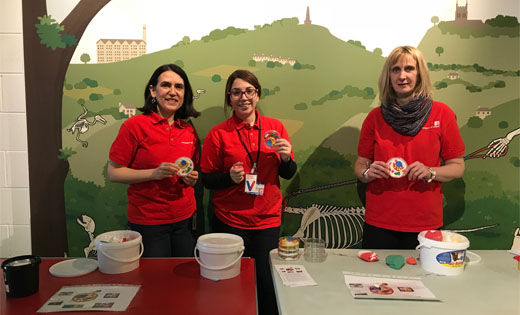 Under the banner of British Science Week, several teams from the University have been engaging with young visitors at Eureka!, the national children’s museum in Halifax, to inspire them about the joys of scientific discovery.

Leeds Institute of Biomedical & Clinical Sciences (LIBACS), part of the School of Medicine, sent a team to explain to children about the properties of body cells.

And PhD students have been manning a pop-up Virtual Reality Zone in the museum’s Imagination Space, offering 360-degree Virtual Reality (VR) experiences to enthuse children about what the future holds for this ground-breaking technology.

Success of events like Eureka! have also seen the VR team exploring plans to expand links with other museums across the north.

Dr Faisal Mushtaq is a University Academic Fellow at the School of Psychology. He is a cognitive neuroscientist investigating how humans learn skills and how such knowledge can aid VR systems to accelerate that learning.

He said: “We are on the cusp of something really big here – it’s very exciting.

“VR has huge potential to promote positive societal change, from communicating to learning to healthcare. We can use VR to simulate very abstract concepts to help better plan future policy.

“Children will be the audiences of the future. We want to engage with them as VR is going to massively impact on their lives.

“This is the first museum engagement we have had. It’s a small pilot project, but we hope to have a much bigger network in place by the summer. It’s a pretty exciting undertaking.”

Discussions are also ongoing with museums in Bradford, Leeds, York and further afield.

One concept is making museum collections available to a much wider audience.

Dr Mushtaq added: “We’re exploring the possibility that visitors to one museum will be able to experience exhibits from all the others in the network via VR. Museums are also stretched for space and can’t put all their artefacts on display at any one time. But we can make them available to the public through VR.

“We are helping develop the museums of the future, allowing people to explore the world.”

But this is only one side of the coin, as massive research potential is generated through the project.

Computers have already changed the way we live, work and play, but VR promises to take it to another level.

And Eureka! was the perfect opportunity to collect data from how youngsters interacted with the VR technology.

Professor Mon-Williams said: “It was just wonderful seeing children getting so excited. You just think that in a decade there is no way these systems aren’t going to be fully exploited to better educate schoolchildren.

“It’s almost impossible to believe it is not going to transform our lives for the better, and Leeds wants to be at the vanguard.”

They made modelling clay cells to explain what the different parts do. Children could take their ‘cell’ home to show their families, together with a leaflet explaining more about what they had learned.

Dr di Martino said: “The children really enjoyed it judging by the smiley faces drawn on our feedback board!

“They also had to answer a question at the end of the session, and it was pleasing to see they nearly all got it right.

“This was only my second time doing something like this and I’ll definitely be doing it again. I’m now also training to become a STEM [Science, Technology, Engineering and Mathematics] ambassador as it’s an area that really interests me.”

These contacts were facilitated by the Public Engagement team. Please contact the team if you want to know more and would like to get involved with these kind of opportunities.