An artist who explores the meeting of human perception and Artificial Intelligence has been selected as the winner of the 2018-19 DARE Art Prize by Opera North and the University. 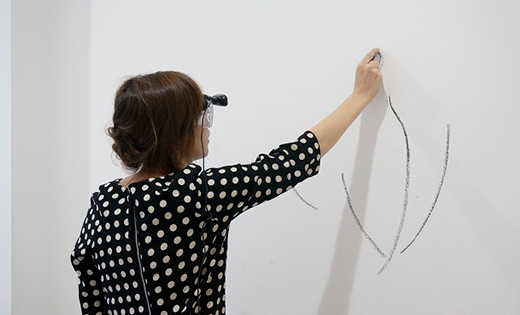 Working with scientists at the University, Anna Ridler will explore the functions of memory and the roles of the left and right sides of the brain, and how their operation might be embodied in a work of art.

Aimed at challenging artists and scientists to work together on new approaches to the creative process, the £15,000 DARE Art Prize was launched last year as part of the DARE partnership between Opera North and the University, which has become a globally recognised model for collaborations between the arts and higher education.

Anna’s practice brings together technology, literature and drawing with her longstanding interests in neurology and machine learning, to create both art and critical writing. She is interested in making works that use technology or science not for their own sake, but rather as tools to talk about other things such as memory, love or decay. Previous works have included teaching an Artificial Intelligence how to draw in her style, and using augmented reality to uncover a hidden love story in documents uploaded to Wikileaks.

Last year Anna worked with composer Benjamin Heim on Drawing with Sound, training a neural network to recognise shapes that she drew in charcoal via a pair of glasses fitted with a webcam, then to interpret these forms as sounds developed by Heim from a recording of a soprano singing. She has also collaborated with quantum physicists at the University of Bristol and Artificial Intelligence research scientists in the commercial sphere. Over the year of her DARE Art Prize commission, Anna plans to work with scientists in the Language and Memory Laboratory, and the wider School of Psychology.

Anna comments: "Using technology as an integral part of the process, the idea of memory and remembering is something that I try to explore in my work. What is it? How does it work? What can we do to trigger memories? How and why do we forget?

"I want to connect the intangible with the tangible world. For many people the concept of memory and remembering remains a very abstract thing, and visual art can help to convey these experiences and processes that might otherwise be obscure. I’m excited to have this opportunity to meet scientists on their own ground, to engage with people from different disciplines and to bring the arts and science together in a final outcome."

Applications for the Prize were received from artists in all media from around the world, and the shortlisted proposals included a large-scale mirage produced by heat haze, a brain-computer interface that would record and perform music without the composer lifting a finger, and a score for opera singers and reggae vocalists produced using algorithms that simulated symbiotic processes in the natural world. The winning entry was selected by a panel comprising Opera North’s Projects Director Dominic Gray, Professor John Ladbury, Executive Dean of the Faculty of Biological Sciences at the University, and science and culture consultant Lisa Jamieson, former Head of Engaging Science at Wellcome.

Professor John Ladbury comments: "The collaborative proposals submitted for the second DARE Prize have shown once again that the thinking and experiences of artists and scientists are not mutually exclusive as they are often thought to be, and in some areas they maintain a symbiotic relationship.

"I was really impressed by the inventiveness shown by this year’s applicants, and Anna was especially engaging and open-minded. The left and right sides of the brain should both be explored by the art world."

Following a year of research into low-frequency sound, climatology and the paranormal, the winner of the inaugural DARE Art Prize, composer and sound artist Samuel Hertz, will present his final work in the Howard Assembly Room at Opera North, Leeds on 14 April. Focusing on inaudible infrasound as a way of illustrating complex relationships between humans and environments, it will comprise electro-acoustic pieces for small ensembles, video, live electronics, performance and mixed-media installations.