Vice-Chancellor, Alan Langlands, celebrating with organisers of the 2017 Staff Festival 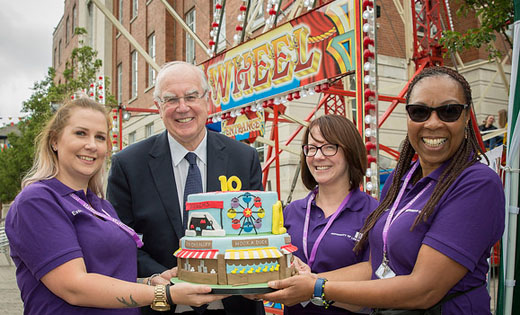 A Festival of Making will be a packed programme, featuring workshops, refreshments, entertainment and competitions suitable for all ages.

All University staff, family and friends are invited to join us on campus on Friday 6 July 2018 for an enjoyable afternoon of activities, full details of which will be announced nearer the date.

Staff are also invited to suggest ideas for the day, as well as nominate and vote for this year's charity.

This is your chance to nominate a charity for 2018 that fits the following criteria:

• it must be officially registered with a charity number and website
• it can't be a University charity (including LUU)
• it must have no affiliation to politics or a political party; and
• it can't be a charity that has already been used. These are listed below:

Nominations can be emailed to the Staff Festival team, who can also send out hard copies, if required.

The winning charity will be announced at the Staff Benefits Fair on 21 March 2018.

Staff are also invited to suggest ideas for workshops that could take place on the day. Please email any ideas to the Staff Festival team.