Chris Packham's book, Fingers in the Sparkle Jar, has been voted the UK’s favourite piece of nature writing in an online poll organised as part of a research project led by the University. 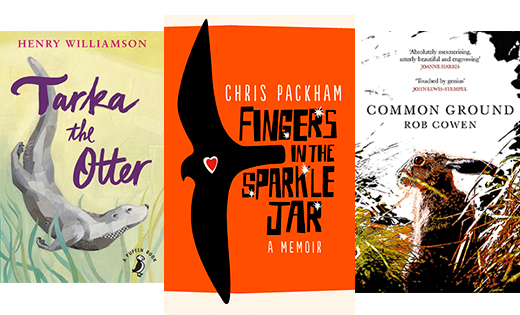 In second place was the classic Tarka the Otter by Henry Williamson, and in third, Common Ground by Rob Cowen, a History of Art Alumnus from Leeds.

The poll was organised by the Arts and Humanities Research Council (AHRC) to help launch Land Lines, a two-year research project it is funding, and the result announced on Winterwatch on BBC2.

The project is examining the history of modern nature writing from 1789, when Gilbert White’s The Natural History of Selborne was first published, to the present day.

In total, 7,300 votes were cast by the public in a national online poll featuring 10 shortlisted books. Also on the final shortlist were:

These were selected by a panel of experts from 278 titles nominated by the public last year.

Dr Pippa Marland, Research Fellow in the School of English, said: "The Land Lines team would like to congratulate Chris Packham wholeheartedly on his well-deserved win. Fingers in the Sparkle Jar is an outstanding book: raw and brave, and written with an astonishing vividness of perception and recall.

"With this memoir Chris has succeeded in attracting readers who would perhaps not usually pick up a ‘nature book’. Informative and heart-breaking in equal measure, and graced with a punk sensibility and wry sense of humour, Fingers in the Sparkle Jar is a work of great originality which pushes at the boundaries of the nature writing genre."

Read more about this story, including comments made by the public.