The School of Music celebrated its new coveted All-Steinway School status with the performance of a specially-composed piece of music – for 28 new pianos. 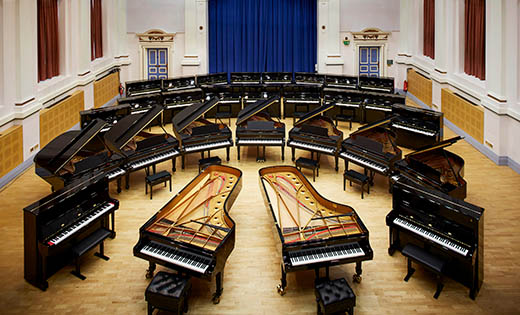 The premiere marked the early morning arrival of 27 new Steinway pianos at the University’s School of Music, joining a concert grand already there.

Leeds has joined prestigious international institutions such as New York’s Juilliard School and becomes the first member of the UK’s Russell Group of universities to use the instruments – favoured by the world’s top pianists – throughout its practice rooms and concert halls.

Dr Mic Spencer, Deputy Head of the School of Music, created and performed Resonance/Light/Decay with one of his former PhD students, composer Dr Alannah Marie Halay.

The 28 performers in the Clothworkers’ Centenary Concert Hall today were made up of staff, students and guests from some of the University’s partner organisations such as Opera North.

Colleagues from the Communications department hosted a Facebook live from the balcony of the Centenary Hall in the lead up to the performance. You can watch the video on the University of Leeds Facebook page. 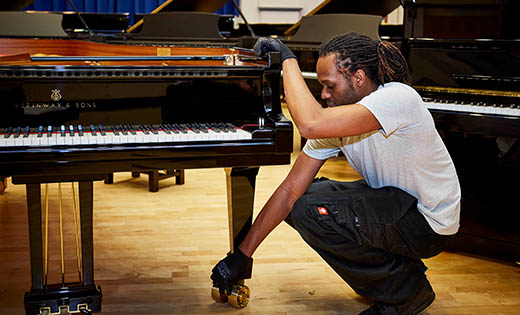 Making last-minute preparations before the performance.

The University has invested just over £742,000 in the pianos – a combination of uprights, baby grands and concert grands, which have arrived in time for Christmas.

The upgraded facilities will enable students across a wide range of courses in the school to practise, perform, compose and record with top quality instruments. Members of the hugely successful Leeds University Union Music Society from across all of the University’s faculties will also benefit from using the new pianos.

Taking to the keys was the Head of the School of Music, Dr Burland, who says: “We are very excited about the opportunities this investment affords the School, its students and staff. We know it will help us continue to attract world-class performers and colleagues. It will also help strengthen our place in the cultural life of the city.”

University Vice-Chancellor Sir Alan Langlands adds: “This investment comes at an exciting time for culture on campus and across the city and will help fulfil two of the three key aims of our new Cultural Institute: the widening of cultural engagement and participation, and the enhancement of the skills of our students. It also responds directly to the demand from students for improved practise facilities in the University.”

Most of the School’s old pianos have been found new homes among local schools, community groups. An inaugural public concert next summer will celebrate the pianos’ arrival and the All-Steinway Status. In the meantime, they will be enjoyed by staff, students and members of the public alike in performances as part of the University’s International Concert Series programme.

🎉 We logged on this morning to the news we've reached 5,000 followers! 🎉 Thanks to all of you for joining us and c… t.co/N8IwPPbjtq

RT @UniLeedsEngage: ⏲Deadline approaching to get involved in #BeCurious22! @UniLeedsStaff, can you help us to inspire our community & ge…