A recently uncovered Chilean mural created in the 1970s by political refugees in Leeds University Union (LUU) will undergo restoration work thanks to the Heritage Lottery Fund. 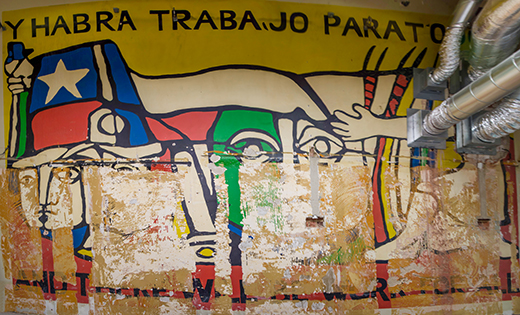 Made possible by money raised by National Lottery players, the project will restore the mural and re-establish its cultural significance as a piece of community and political art within both the Chilean and local communities.

The mural, which was hidden for 40 years behind a wall in the Union foyer, was rediscovered during a recent refurbishment. It was originally painted by Chilean students and activists who left their home country to escape persecution under General Pinochet’s regime.

They created the mural in the Union to draw attention to the dictatorship and acts as a symbol of workers solidarity, a crucial part of Chilean heritage. An example of LUU’s own rich heritage in supporting student political expression. It also reminds us of the importance and value in welcoming refugees into our communities.

The mural will form the centrepiece of a resource library dedicated to refugees and asylum seekers, bringing members of the student, local and Chilean communities together.

Gilberto Hernandez, who was one of the students who painted the mural, says:

“This mural is very meaningful to me; I helped to paint it together with other refugees when I was student in Leeds after being exiled from Chile. It  has a strong meaning to me because it denounces the crimes committed by the Pinochet dictatorship and still acts as a symbol of solidarity and friendship for the people who have been persecuted by dictators and continues to show hope for refugees.”

A mobile library installation created by MA students from the School of Fine Art, History of Art and Cultural Studies will mark the beginning of the restoration at the launch event between 4-5pm on Thursday 7 December in LUU. All are welcome to attend.

“As part of our project, we are collecting memories of the mural to document its history through people’s personal experience of how they perceived it from either seeing it or even being involved in creating it.

“These memories will form part of our exhibition, in written or audio format.”

If you remember seeing a mural in the Leeds University Union building and are happy to provide some details, please email Hitomi Ishida

The restoration will begin in January 2018 with an aim to finish by the end of February 2018.