What can the First World War teach us?

Find out about the past and cutting edge present of wound care at events organised in memory of Nellie Spindler during ‘Stop the Pressure’ week.

A wounded man from Zeebrugge having his wounds dressed at Chatham. Wellcome Collection 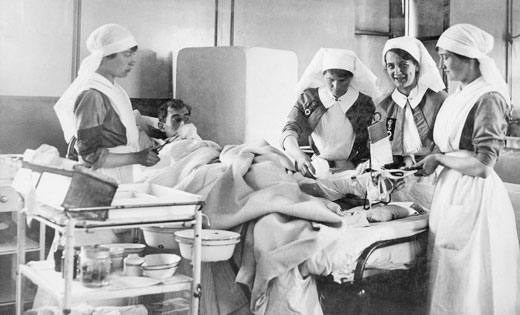 A recreated First World War field hospital and groundbreaking research into wound care will be combined as part of an innovative event partnering history with healthcare this week.

The free 3.30-5.30pm event for Nurses on the Frontline of Wound Care: from Passchendaele to Pressure Ulcers will commemorate Nellie Spindler, a Wakefield-born nurse who qualified in Leeds in 1915.

She died in August 1917 aged 26 after a blast at a hospital just three miles from the frontline near Ypres and was buried with full military honours and is the only woman buried in the vast Lijssenthoek Military Cemetery – among 10,000 men.

The interactive exhibition includes a recreated field hospital “staffed” by re-enactment group, Wenches in Trenches, which aims to raise awareness of the Voluntary Aid Detachment members, nurses and other women who served in the war.

The exhibition will also showcase items and objects from the University’s Special Collections, Leeds’ Thackray Medical Museum and from West Yorkshire Archive Service, as well as a poster display of research into wound care past and present.

Performances based on excerpts from First World War nurses’ diaries by historical interpreter Dr Kate Vigurs and former students of the University’s School of Performance and Cultural Industries will also take place.

The afternoon event will follow an academic conference on the same subject earlier that day. Both events are being held to coincide with Stop Pressure Ulcer Week, which aims to highlight a significant problem which affects 700,000 people in the UK each year.