A technician on ice

Andy Connelly, a technician from the Faculty of Environment, tells us about his experiences of science at the extreme on a field trip to Greenland.

Just off the helicopter - perfect time for a selfie! 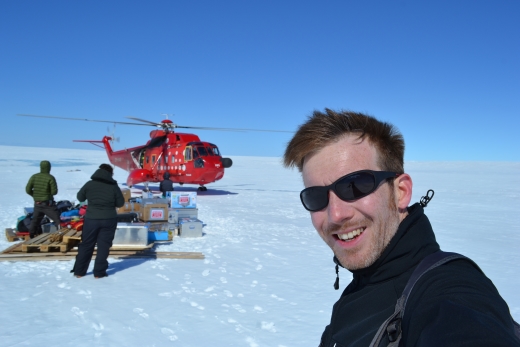 As I write this it has been a week since I returned from eighteen days on the Greenland ice sheet. My toes have nearly defrosted and thoughts of Greenland’s ice-cold beauty, dreams of helicopter rides, and the taste of Ryvita for lunch still haunt me. As a laboratory technician and lab manager it is rare that I get to escape the lab, so when I was offered the opportunity of assisting fieldwork in Greenland I had to say yes. Six of us would head out there to investigate why the ice sheet is melting faster than expected, six of us stranded like mariners without sight of land, our only communication to the outside world limited to a couple of old satellite-phones. I was nervous of polar bears, slush flows, and isolation, but it turned out to be an amazing place to work.

Taking off from the small Greenlandic frontier town of Kangerlussuaq it was clear that helicopters were the way to travel. The helicopter sailed smoothly over the primitive scree landscape of the glacial moraine and onto the endless ice and snow of the ice sheet. Later, perched on boxes of scientific equipment, Ryvita, and tinned fish, we watched our only ride out disappear into a bright blue sky. I think we all quietly prayed that it would return.

I looked around at those who were to be my companions and work colleagues for the next eighteen days. We were a mixture of British, Canadian, Polish, and American, based at universities in Leeds, Bristol, and Cardiff. We comprised a professor, two post-docs, two PhD students and me, a technician. However, none of these identities seemed important in that moment. We were just six people who were getting hungry. Time to pitch camp.

Our camp-to-be was located on the side of a gently sloped valley, which opened up below us into an icy plain. We were there early in the season which meant snow, not ice, was to be our mattress, our source of water, and the initial focus of our work. It was my first foray into fieldwork but the others had been there before so the camp soon began to take shape with mess, laboratory, and personal tents popping up around us. The flapping of the tent fabric in the wind would be our constant companion from that point on, beating itself against the Arctic silence in a way that, I imagined, had tested many explorers’ sanity. 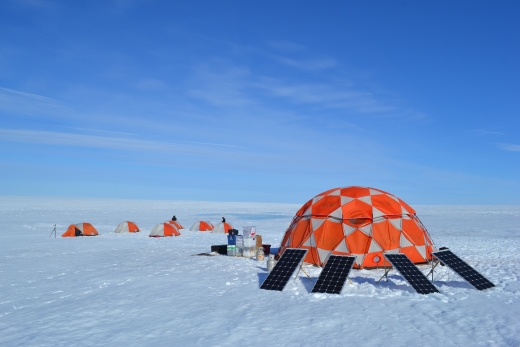 Laboratory tent with solar panels and the personal tents alone for miles around. The mess tent is out of picture.

As a technician, with little previous involvement in the project, I had no scientific question to answer, no project over which I could claim ownership. I was there to lend support for the Leeds contingent, a role that was difficult at times as it lacked the autonomy of my day job. I was fortunate to be working with a welcoming group of people, people willing to bring me into and explain the aims of the project https://blackandbloom.org/, giving me a sense of purpose. I learnt how the ice sheet was melting faster than expected because the ice was getting darker so absorbing more of the sun’s heat. How the samples we collected would be examined for the origin and types of black carbon and other ‘dark particles’ that might be partially responsible for the darkening. As we talked, the real surprise was the other part of the project. Microrganisms, such as algae, that lived on the ice were also thought to darken the ice. Our results would help us understand how the algae manage to live in this harsh environment. The feeling of purpose these conversations gave me meant that during more mundane tasks, like 6 hours of filtering, I could imagine myself as Jeff Goldblum trying to save the world – thankfully without the dinosaurs!

Collecting samples for filtering often meant being on our knees in the snow cold. As we shovelled snow into sample bags the snow structure revealed itself. It was not the uniform mass I had expected; more a multi-layered crème brûlée of hard, crisp ice layers and beautifully soft snow. It was a deceitful structure; its sugar crisp surface would hold my weight in the morning as I walked to the mess tent for breakfast but would defy my trust in the evening, often sending me knee deep in soft snow or worse, slush. The slush, however, was why we were there; the previous year they had been there after the melt to look at the ice, this year we were there to see the melt happen. 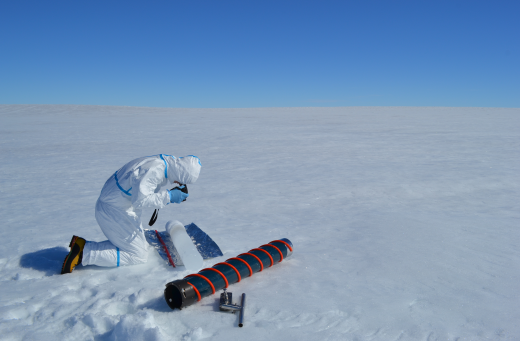 The melt defied my initial impression of the ice sheet as an unchanging, static landscape. As the days ticked by, bright blue melt water lakes quietly began to stud the plain below. Later, rivers would form; some raged down slopes, white water carving its way across the snow-ice landscape. While setting up equipment to monitor one of these rivers, I sat on the river’s ice bank throwing pieces of ice into the water that flowed, no rock or soil in sight. As a first timer on the ice, I was fascinated by every change. The rapidity of change meant lots of samples were required, so we worked long hours each day. 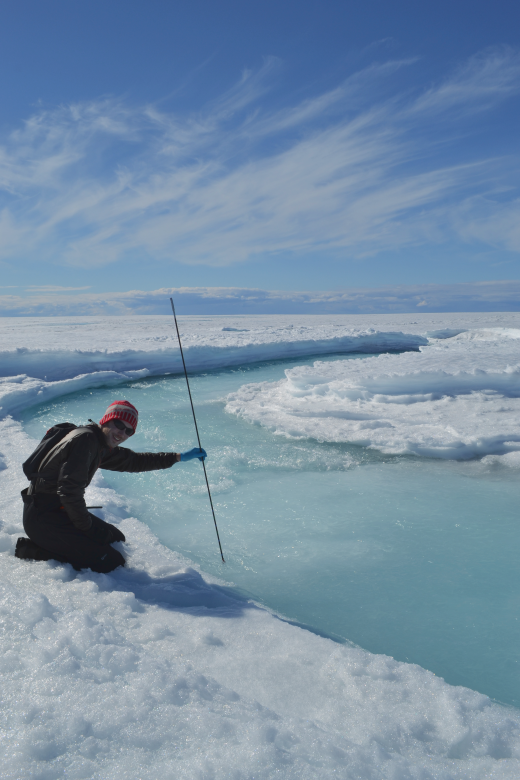 The author measuring the depth of a newly formed river.

Over the eighteen days of the fieldwork I filtered 89L of water onto various types of filter paper for later microscopy and DNA analysis; processed water samples for later analysis of the elemental and nutritional content; measured pH and conductivity; extracted ice cores; dug two toilets; and spread 300ml of sun cream on my face. Considering our location, the lab facilities were amazing. We set up vacuum pumps, a microscope, a spectrophotometer. In fact, the most difficult part of the work was melting the ice samples when the air temperature varied between –6 and 2°C. 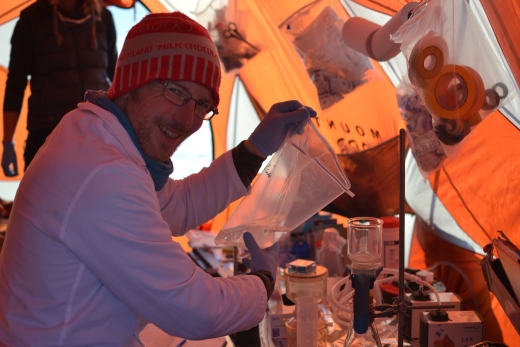 Filtering in the lab tent – the woolly hat was an vital piece of PPE!

It snowed the morning of our lift off the ice, so, as the helicopter landed, it threw up a cloud of fresh snow, obscuring it from view. I was suddenly afraid that it would not be able to land and we would be stuck. While I’d had an amazing time, I was ready to return to my wife, a Ryvita free diet, and the simple pleasures of a sofa. Thankfully, the two of us who were leaving were soon exchanging hellos and goodbyes with the three new arrivals. Farewells were said and off we went, flying over the pure sterile white of the ice into a dirty world of colour and, eventually, the warm embrace of home.