After weeks of meticulous preparation, the eyes and ears of a cricketing nation will be on the wicket at Sports Park Weetwood today. 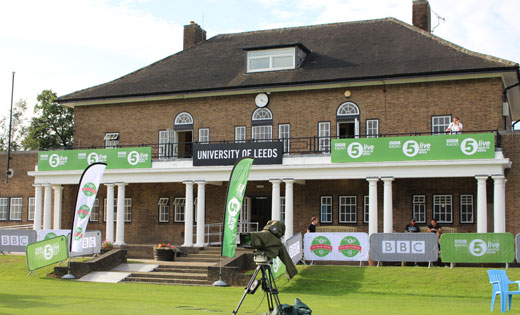 The University is hosting the Test Match Special anniversary cricket match this afternoon – to celebrate 60 years of a radio programme that has been the voice of cricket.

The BBC has organised two mixed teams of cricketing greats and celebrities to play a T-20 match.

It is being screened on the BBC red button from 16.00 and there will be live commentary on BBC 5 live sports extra – and watched by 1,500 spectators.

Since the BBC approached the University and asked if the match could be hosted at Weetwood, a team led by the Sports and Physical Activity Department from Campus and Commercial Services have been working hard to get the project up and running.

A temporary stand for spectators has been built, catering organised, security planned – and perhaps most important of all, the wicket expertly and lovingly prepared.

Gawaine Mackenzie-Hogg, who manages our outdoor operations said: “It’s been a bit of a whirlwind. But this was a great opportunity that we could not turn down.

“Test Match Special is a broadcasting and cricketing institution and it is good to be part of their anniversary celebrations.”

Suzanne Glavin Head of Sport and Physical Activity said: “It allows us to showcase some fantastic sporting facilities that students and public can enjoy. We can also explain the work we are doing to develop top-flight cricketing talent, the names who’ll no doubt feature on future Test Match Special broadcasts.”

Run in partnership with Leeds Beckett and Bradford universities, the MCCU scheme allows students to receive elite cricket coaching and county-level experience with the aim of signing a professional contract by the time they graduate.

Both men and women cricketers who have passed through the scheme have gone on to play for England.

Suzanne added: “For those aspiring professional cricketers, we can offer an unrivalled level of training and match experience.

“Leeds-Bradford MCCU is one of six centres of excellence. Together, they are having an impact on cricket – across county cricket, one-fifth of all English qualified players attended an MCCU.”