In June the Gryphons Abroad team travelled to South Africa to deliver a life-changing sport and education programme to over 120 primary school children. 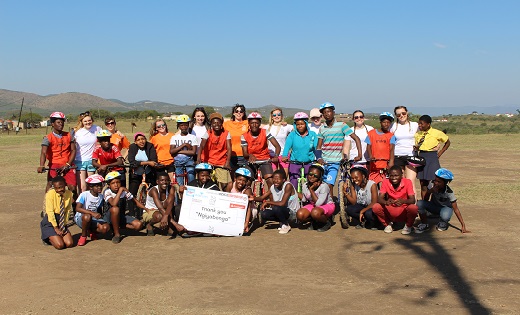 The Gryphons Abroad programme, organised by Sport & Physical Activity, began in 2016 as a partnership between the University and a local charity called the Bambisanani Partnership. This year the team consisted of three staff members – Andy Lockwood, Tom Exeter, and Tilly Hall – along with nine university students from a variety of different degree programmes and years of study, from first year undergraduates to postgraduates.

Over two weeks the programme delivered two key projects which aimed to raise the aspirations and living standards of South African students through sports leadership initiatives. Cycle to Success involved teaching 22 primary school students to ride and maintain bikes, to help students overcome the barrier of a sometimes two hour commute, each way, which they have to get to school. Some of the children had never ridden a bike before, and the Gryphons Abroad team left in the knowledge that they had delivered a set of life-changing skills and given the South African students a huge boost in confidence, especially for the female students who would not usually be given this kind of opportunity in the culture they live in.

The second project, Inspire through Sport, saw University students plan and deliver four days of sports, leadership and classroom sessions to over 100 children from four local primary schools. The South African students developed a range of skills throughout the week, increasing their confidence to lead on activities back in their own schools after the Leeds team had left. Encouragingly for the Gryphons Abroad team, a number of students have now set up their own football and netball clubs for other students to enjoy.

In the lead up to the 2017 trip the team raised over £26,000 for the project through various fundraising activities, which enabled them to donate 20 bikes and other equipment to the four primary schools. The team also visited a local orphanage, supplying some key resources such as clothing and books, as well as donating funds to help provide food for the children.

The Gryphons Abroad team said: “A big thank you to Commercial and Campus Support Services staff and the University Sustainability Department who supported the project by donating money or time and resources. A massive thank you also goes out to all the staff in the Facilities Directorate who donated to the book drop in advance of the trip, all books having found a new and happy home.” 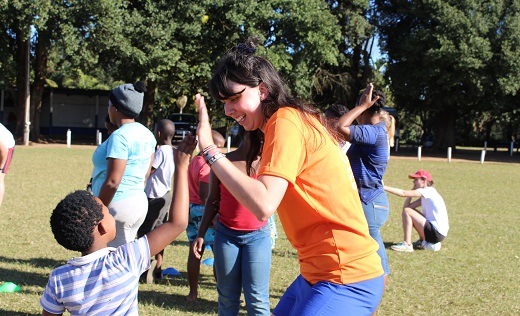 “Gryphons Abroad is without doubt one of the best things I’ve ever done - I just wish I could do it every year” - Amy Grabe, 2nd year Philosophy student. You can read Amy’s blog about her experience volunteering in South Africa at goo.gl/JoZazw.

Staff and students received great recognition for the Gryphons Abroad programme as it was shortlisted for ‘Great Volunteer Award’ by the Yorkshire Universities Sports Awards. It is now entering its third year and plans are already in place to develop it further; taking a larger team of university students over and expanding the programme to teach an even greater number of South African children.

To view photos and to read more about the Gryphons Abroad programme visit leeds.ac.uk/gryphonsabroad.