Following its impressive refurbishment, the Edward Boyle Library will be officially re-opened by Melvyn Bragg, the University’s Chancellor, on 13 July. 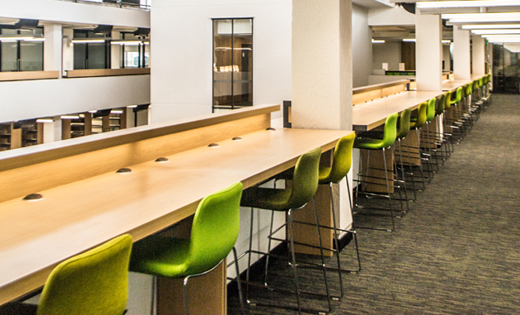 The Edward Boyle Library now boasts over 2,000 study spaces, accessible student rooms, a café and wonderful views across campus. And Level 13 of the Library offers both individual and collaborative spaces within the postgraduate Research Hub which is home to the Library’s Research Support and Data Management Teams. The Library houses the main collections for Science, Engineering and Social Science.

Aside from a degree ceremony the following morning, the event will be Lord Bragg’s final formal engagement as Chancellor; he is stepping down on 31 July, after 17 years.

Earlier in the day, Lord Bragg will preside over two degree ceremonies, at which he will confer honorary degrees upon several of this year’s recipients. The complete list of this year’s honorary graduands is:

More information about this year’s honorary degrees is available on For Staff.

The University’s next Chancellor will be appointed by the Court on the recommendation of the Council, and will be announced in due course.

To book one of the Edward Boyle Library bookable spaces, visit the Library website.

RT @ITServicesUoL: In the run-up to the end of term, we thought we’d share some interesting @UniversityLeeds IT facts. Join us over the…

📝 The latest in our fascinating new Q&A feature series is published today. Discover what makes our Chief Data Offi… t.co/89n2oau2Qj