The Pint of Science festival helped to rekindle interest in science across Leeds during May this year. 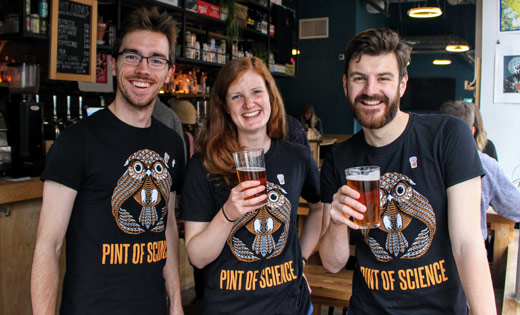 The festival, run by university postgrads and staff, attracted 700 Leeds residents to pubs around the city centre for three nights of science.

Pint of Science is an annual festival held in cities around the world over three nights in May. For researchers, it’s an opportunity to share their latest results with the public in the relaxed setting of a pub. People can come along to learn something about the research going on in their city, join in with live science demos and get a chance to chat to local scientists.

The Leeds branch of the festival started in 2016 with nine events spread over three themes. For Pint of Science 2017, we expanded to cover five themes, each hosted in a different venue and covering the three nights of the festival from 15 to 17 May.

The events were all organised and run by 40 postgrad and postdoc volunteers and we had talks given by 35 speakers drawn from across a wide range of disciplines and from all career stages, from PhD students to professors.

Volunteers and speakers had a great time taking the world class research happening in Leeds out of the university and into public spaces.

The festival had a great atmosphere; audiences thought “the enthusiasm of the presenters and volunteers was great” and they found the talks “accessible and entertaining”.

Pint of Science allows people to connect with science in a different way. One person told us, “I liked the demos. I dropped science at GCSE as I strongly disliked it but I really enjoyed these talks and have learned a lot. Keep it up!”

We’re looking forward to heading back out to the city’s pubs in 2018 with another round of science festivities.