The incoming chair of the new body set to oversee the UK’s research councils, Sir John Kingman, visited the University to look at the impact of its research. 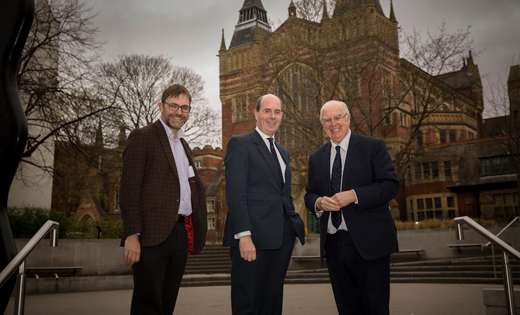 During a series of meetings at the University last week, interim chair of UKRI, Sir John Kingman, learnt about the areas of research strength at Leeds, alongside the University’s future plans and its significant investment in facilities and technology.

Sir John described the University of Leeds as ‘one of the UK’s greatest research universities’ and explained to senior professors the role which UKRI expects to have in supporting research, both in terms of projects and people.

He said the existing funding bodies would continue to operate under UKRI, and the extra £2 billion of funding per year by 2020 announced in the Autumn Statement would give them an opportunity to think more strategically about how they invested in research in universities.

As well as the seven councils, UK Research and Innovation will also have oversight of Innovate UK and the Higher Education Funding Council for England’s research and knowledge exchange functions. As such it is set to play a defining role in the country’s higher education sector.

Among the research centres which Sir John learnt about during his visit to Leeds were:

Sir John also heard from Professor Lisa Roberts, Deputy Vice Chancellor: Research and Innovation, about the University’s impact across higher education, and in sciences, the arts and humanities.

Sir John was told about the forthcoming Integrated Campus for Engineering and Physical Sciences, which will host the University’s Bragg Centre. Forming a £96m project, it is the biggest single investment ever made on campus and is part of the University’s £520m campus plan to help secure its position as one of the UK’s top 10 research universities.

Also highlighted was Nexus, the new £40m innovation centre which will provide a step change in how the university opens itself to industry and business, as was the planned Institute for High Speed Rail Engineering, due to be launched later this year.

Professor Roberts stressed the importance of matching investment in research infrastructure with investment in people across the whole career spectrum. She discussed plans to raise the number of PhD students by 500 to 2,800 by 2019, and to recruit 250 University Academic Fellows and 40 top-performing professors by 2020. This sets the context for a successful university with long term plans in place, and well defined centres of collaborative research excellence.

Speaking to leading professors and several University Academic Fellows, Sir John gave an insight into UKRI’s likely priorities, once it is formally launched in April next year.

He said a continued focus on supporting scientific excellence would be coupled with a focus on commercialising the most significant discoveries.

In the context of the additional £2bn research funding announced by the Chancellor Philip Hammond in the Autumn Statement he said arts and social sciences would also be backed, but he encouraged researchers in those fields to bring exciting and interesting ideas to the table.

Acting as an advocate, and a voice for the research community would also be important, he said, as the Government negotiates the Brexit settlement.

Read the Vice-Chancellor’s most recent comments on the University’s approach to Brexit. Posted in: University news
Email Tweet Like LinkedIn