The University has commissioned the British-American artist, Liliane Lijn, to create a new work of public art for campus and staff and students can play a part.

The artwork will be located next to the new Nexus building, due to open in autumn 2018.

Converse Column, a nine-meter high revolving column of transforming words, is being designed to support Nexus in inspiring collaboration and innovation with real world impact.  Lijn is calling on staff and students to contribute ideas and to help create text for the artwork.

Lijn said: “I am inspired by the concept of Nexus. So much of my work is about just that: connections, relation, conjunction, invention and research.

“I want to create a work that asks questions and encourages discussion so Converse Column will represent communication as a creative symbol of the University of Leeds and Nexus.

“Transformations in science and technology happen on university campuses because of the connections between ideas and people. I hope this artwork may give us the opportunity to celebrate this amazing process. I look forward to lots of text contributions.” 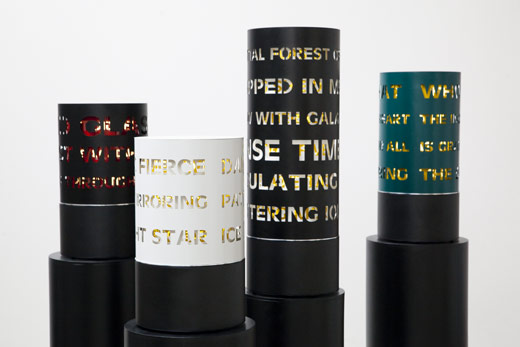 Lijn added: “Syntax is all about the position of words and their relation to each other. However, by considering the words divorced from their syntactical connections, unexpected meanings can be revealed.

“Due to the design of the column, the text inscribed on it is not easily read in the normal linear left to right manner. Instead, words appear to float in and out of consciousness.”

Find out how you can contribute to Converse Column.

Liliane Lijn has an international reputation developed over more than 50 years for exploring the relationship between art, science, technology and language.  Her work is represented in both private and public collections around the world. She has produced numerous major public commissions for hospitals, universities, local authorities and commercial companies.