Government ministers have announced that the University of Leeds is to receive a multi-million pound share of funding. 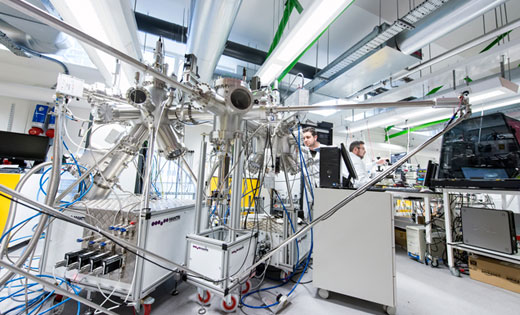 The funding is part of a £235 million commitment by the Government for the Henry Royce Institute.

It follows the decision by the University to invest £96 million to bring together research and teaching across Engineering and Physical Sciences, to inspire new ways of working across disciplines, help tackle industry challenges and support industry collaboration. The £96 million investment includes the creation of the Bragg Centre, dedicated to the growth, fabrication, characterisation, imaging and measurement of advanced functional materials.  It will be the focus for new laboratories and facilities that are part of the Henry Royce Institute. The initial investment by Government includes £4.1 million for new precision equipment, to support the atoms to devices (A2D) research theme, which will focus on the translation of new material systems from the atomic scale to operational devices. Professor Lisa Roberts, Deputy Vice-Chancellor: Research and Innovation, said: "This is a significant investment and signals that we are playing a critical role in the UK's advanced functional materials activity. "Leeds, as a key partner of the Henry Royce Institute, is rightly at the heart of securing the UK’s position as world leader in advanced materials, and we are very proud to be bringing together some of the greatest minds and outstanding facilities to drive this research. "This kind of innovation is absolutely critical to support all industrial sectors and the national economy." The A2D theme is jointly led by Edmund Linfield, Professor of Terahertz Electronics in the Faculty of Engineering, alongside colleagues at Imperial College London.  It brings together researchers in Leeds from across the engineering and physical sciences. Following the announcement that Professor Roberts has also been elected to join the Henry Royce Institute governing board, she added: "I am delighted to be one of the four founding partner governing board members and look forward to playing a key role in ensuring that the Institute delivers real benefits to the universities involved, industry and the UK." Greg Clarke, Secretary of State for Business, Energy and Industrial Strategy said: "Research and development has a proven track record of making our economy more competitive and creating new products, services and better ways of doing business. For these reasons, we’ve placed the UK’s strengths in science, research and innovation at the core of our modern industrial strategy." Jo Johnson, Minister for Universities and Science, added: "The Royce Institute and grants announced today will benefit our world-leading science and innovation sector. The Government is determined to support further commercialisation of our science and research discoveries as innovation leads to new products, services and better ways of doing business. Our modern industrial strategy will help us ensure the UK maintains its status of one of the best places in the world to conduct research, discover and innovate.” The beneficiaries in this first tranche of funding include the Universities of Cambridge and Sheffield, Imperial College London and the Culham Centre for Fusion Energy (CCFE), that form the satellites - or spokes - of the Institute, along with the Hub at The University of Manchester. Other spokes, the Universities of Liverpool and Oxford and the National Nuclear Laboratory, will receive funding at a later date. The announcement is part of the £235 million capital funding announced in the Autumn Statement 2015 and comes from the Engineering and Physical Research Council (EPSRC). It forms a crucial component of the Government’s Northern Powerhouse initiative and an attempt to boost economic growth in the North of England and balance the UK economy. Posted in: Research and innovation
Email Tweet Like LinkedIn