A project funded by the University of Leeds, to help young people aim for a place in higher education, has been recognised by the Child Friendly Leeds Awards. 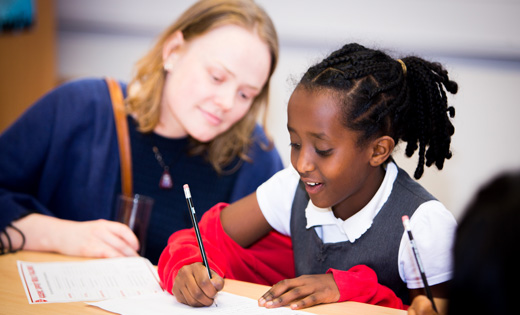 In partnership with national charity IntoUniversity, the University has established centres in Beeston and Harehills which run after-school sessions with young people from disadvantaged backgrounds, aimed at raising their attainment and aspiration. The students – aged between seven and 18 – are drawn from a large number of schools across the city.

The two centres are funded with the support of a number of Leeds University alumni, as well as other donors, including the Asda Foundation. University students also volunteer at the centre, mentoring the young people and encouraging them to progress.

“We're so proud to have won the 'Organisation Inspiring Schools'  award which recognises the  support that pupils and schools receive from within their local community.

“We would like to say a huge thank you to the University for all their support. It's amazing to think that two years ago very few people had heard of us in Leeds.

“The work we do together is important. We know that university is not going to be for everyone but we also know that for some pupils, by the time they get to the end of their time at school they have already written themselves off and decided it is not for them. We want to start at a young age and ensure that children believe in themselves so they are in the best position to be able to make a decision.”

Louise Banahene, Head of Educational Engagement at the University of Leeds said:

“This award is thoroughly deserved. The University is very proud of its work with Leeds IntoUniversity, helping young people to access higher education. The centre works to normalise the university environment so that pupils can get used to the idea of student life and what to expect.”