A new home for the School of Fine Art, History of Art and Cultural Studies

An award-winning scriptwriter was among the scores of alumni returning to the University of Leeds’ School of Fine Art, History of Art and Cultural Studies to celebrate the opening of its new home. 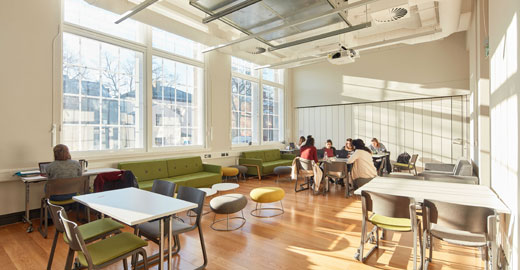 The refurbishment of the listed building in University Road marks an investment of £7.6 million, bringing the School together in one site at close to the heart of the campus.

Vice-Chancellor Sir Alan Langlands introduced former Head of Fine Art Barry Herbert, who cut a ribbon to officially open the building. Peter Morgan, one of the country’s leading screenwriters, then took part in an “in conversation” event in the Great Hall with Griselda Pollock, Professor of the Social and Critical Histories of Art.

Peter, who graduated from the School with a degree in the History of Art in 1985, is famed for writing a wide range of successes ranging from The Queen and The Last King of Scotland to Frost/Nixon and The Damned United. He is also the creator and writer of The Crown, a Netflix television series which recently won the Golden Globe Award for Best Television Series – Drama.

Professor Abigail Harrison Moore, Head of School, said: “Our students are excited to be working in the amazing new studio, workshop and teaching areas.

“Studying in this impressive space for art and culture at the heart of the campus will enable them to continue to benefit from the unique inter-disciplinary approaches to the subjects that our School is celebrated for nationally and internationally.”

The occasion is also being marked with an exhibition by another successful graduate of the School, the 2012 Turner Prize winner Elizabeth Price, who completed her fine art education with a PhD in Leeds. Her video installation The Tent (until 25 February), in the building’s new Project Space forms part of The Fold, a series of talks and exhibitions curated by Dr Sam Belinfante, University Academic Fellow in Fine Art and Curatorial Practice.

Founded as the Department of Fine Art in 1950, the School of Fine Art, History of Art and Cultural Studies moved to its new location last summer. The sympathetic restoration of this Grade-II listed building – linked through its architect, Paul Waterhouse, to the architectural style that formed the beginnings of the University of Leeds more than 100 years ago – will prepare the School for the next century of excellent teaching and research.

Originally built to accommodate Agricultural Sciences, the building was completed in 1924 and was most recently home to the School of Geography from 1993 until 2015.

On Wednesday, alumni and representatives of partner organisations from across the region were able to join current students and staff past and present on tours of the new facilities.

[The opening had been due to be performed by Dr Ingrid Roscoe, a celebrated art scholar and the first female Lord Lieutenant in the North of England. She studied for both a BA and a PhD at the University and lectured there for many years. She was unable to attend the event at the last minute, due to unforeseen circumstances.]