John Plane, Professor of Atmospheric Chemistry in the School of Chemistry, has been awarded the medal by the European Geosciences Union (EGU), for distinguished research in atmospheric sciences. 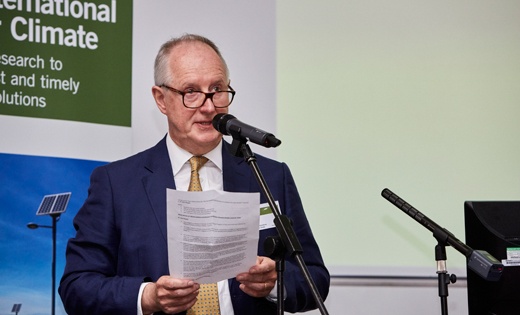 The medal is named after Vilhelm Bjerknes, one of the leading atmospheric scientists of the first half of the 20th century.

Professor Plane is recognised as a world-leading expert in the chemistry of the Earth’s atmosphere, from the upper ocean to the edge of space. His research involves field observations, laboratory and theoretical studies, and the development of atmospheric models, in order understand the interactions between the different atmospheric regions.

During the last 15 years Professor Plane has been central in driving the development of important new fields of research, which have led to a number of important discoveries about the composition of the atmosphere.

A long-term interest has been the chemistry of metals, such as sodium and iron, which evaporate from cosmic dust particles (meteoroids) entering the atmosphere at very high speeds. His work has resulted in the development of atmospheric models in the Mesosphere and Lower Thermosphere which are now the standard tools for interpreting observations made currently by many groups around the world. This research has now extended to the impacts of cosmic dust in the atmospheres of other solar system bodies including Mars, Venus and Titan.

His other major research area is the chemistry of the Marine Boundary Layer; that part of the atmosphere that has direct contact with and hence is directly influenced by the ocean. He was one of the early pioneers of a new instrumental technique (Differential Optical Absorption Spectroscopy or DOAS) to measure species in the lower atmosphere at ultra-low concentrations (1 part in a trillion).

Particularly significant has been his work on iodine species which are emitted from the ocean and impact the removal of pollutants and greenhouse gases.

The EGU is Europe’s premier geosciences union, dedicated to the pursuit of excellence in the Earth, planetary, and space sciences for the benefit of humanity, worldwide. It was established in September 2002 as a merger of the European Geophysical Society (EGS) and the European Union of Geosciences (EUG), and has headquarters in Munich, Germany.