Entries open for the 2017 World Triathlon in Leeds

Whether you're an experienced triathlete or a first timer, public entries for the 2017 Columbia Threadneedle World Triathlon in Leeds open today. 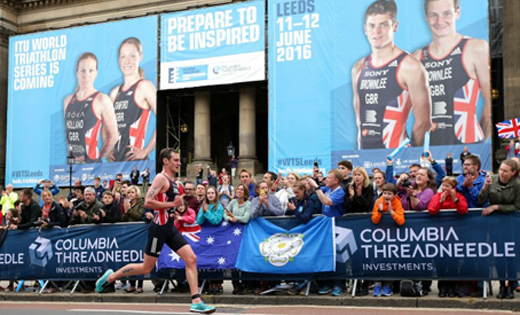 The 2017 event, which will take place on the 10 and 11 June, will host over 5,000 amateur participants, in a weekend packed full of triathlon action for all abilities.

Inspired by local heroes Olympic Champion Alistair Brownlee, Olympic silver medallist Jonathan Brownlee and Olympic bronze medallist Vicky Holland, newcomers to the sport can sign up for a fun-filled GO TRI event in and around Roundhay Park on Saturday 10 June.

On Sunday 11 June, the sprint and standard distance events, as well as the relay, will offer a new and improved course for amateur athletes including a single transition in Roundhay Park. A swim in Roundhay Park’s Waterloo Lake will precede a challenging bike route, before athletes re-rack their bikes in Roundhay Park and head on foot to the world famous blue carpet finish in the city centre's Millennium Square.

Once the mass participation events have concluded it will be the turn of the world’s best triathletes to take on Columbia Thread needle World Triathlon Leeds, the fourth leg of the ITU World Triathlon Series.

Last year the British team was dominated by University athletes. Jonny Brownlee (BA History 2012) and brother Alistair Brownlee (BSc Sports Science and Physiology 2009) were joined by Gordon Benson in the male team, and two members of the female team, Non Stanford and Vicky Holland, trained at the university’s facilities.

The University has strong links with the triathlon, and Director of Sport, Stewart Ross said:  “The University is delighted to be supporting the return of the World Triathlon Series to Leeds. The city is now known as a world centre for triathlon and the University is at the heart of this, having recently announced the investment in a £5m triathlon and cycling centre at Bodington sports grounds off the back of a successful Rio Olympics which included a gold and silver for Leeds graduates Alistair and Johnny Brownlee.

The WTS event was one of the most well supported in 2016 with over 80,000 cheering the professional and amateurs around the course.  We hope students and staff will take the opportunity to participate again in 2017.”

The event, organised by British Triathlon in partnership with Leeds City Council, UK Sport and the ITU, is expected to sell out quickly. Organisers are encouraging individuals to register their interest for the 2017 event in order to be amongst the first to know about entries before they open to the public via the official event website.