A community filmmaking project which began at Leeds held its launch event, #ChangingTheStory, at the Royal Academy in London.

A screenshot from one of the films being showcased, 'Crime Doesn't Pay'. 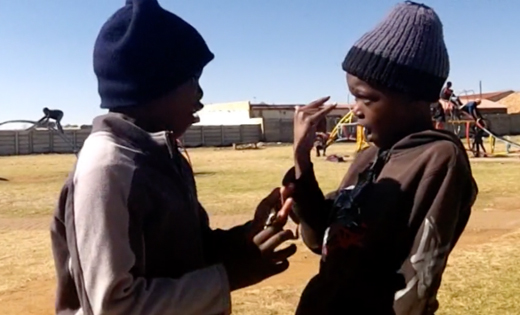 The event included a showcase of five films Leeds students have made in collaboration with partners in South Africa.

Changing The Story is a community filmmaking project headed by Professor Paul Cooke from the Centre for World Cinemas and Digital Cultures at Leeds, working in partnership with the vulnerable children’s charities Bishop Simeon Trust and Themba Interactive in South Africa. The project aims to develop a new approach of empowering young people in South Africa, using creative media to give them a voice and capture and share their experiences and messages.

Five student interns travelled to South Africa in June, along with Professor Paul Cooke, thanks to the sponsorship of the Footsteps Fund at Leeds. Their aim was to work with twenty children in the Tsakane Township in Gauteng province, and help them conceptualise, write, direct, and edit five films based around the theme of #ChangingTheStory. These films were a new way of helping the children explore the most difficult issues in their lives and find powerful solutions. The project also hoped to produce new stories that accurately conveyed the experiences and hopes of the community. The films produced covered issues such as drug abuse, crime and bullying.

The collaborative project has proved beneficial for all involved, not just the children in South Africa. Professor Paul Cook said: “Working with our partner in South Africa has fundamentally changed things for the Centre, allowing us to rethink the power of world cinema for some of the world’s most marginalized communities.”

The project’s UK launch event at the Royal Academy showcased the films. There was also a link up with the group in the South Africa Township. The event took place on World AIDS Day, a fitting moment to show how children and young people in South Africa are challenging the terrible impact of the AIDS epidemic in their communities.

More information about the Changing The Story project can be found on their website.