Meet the new co-chair of the Technicians’ Network

A chicken factory may seem a strange place to start a technical career but Stacey Galloway made it work and is now a research technician in the University.

Leeds-born Stacey was always drawn to science. She says: “I went more towards the science side when I was at school because I liked doing things rather than just writing.”

Her interest led to a degree in Biosciences and Health at Leeds Metropolitan University. The look on her face spoke volumes for how she felt about working in the microbiology labs of a chicken factory straight out of university; her words even more so: “eye-opening”. Luckily enough, after only 10 months a research technician position at the University came up.

She says: “I was really nervous as it was my first panel interview.”  However, clearly she impressed as she got the job and for 10 years she worked in the Faculty of Medicine and Health on Family Heart Study. Her main role on starting was extracting DNA from blood to look at how genes affect the chances of developing heart disease.

In the late 2000s Stacey entered a period of job uncertainty. She was one of the early users of redeployment as an option for University employees. She tells of the stress: “It got to the Thursday before the end of the contract and they couldn’t tell me whether to come into work on the Monday.” Eventually, her skills and experience got her a position working with Professor Kearney in the Leeds Institute of Cardiovascular and Metabolic Medicine (LICAMM).

When I asked about her current role I was a little disturbed to hear the phrase ‘organ bath’! However, she dispelled the horror movie images the words conjured up by describing how she cleans the mouse aortae, cuts them into sections, and suspends them in a physiological solution to mimic what is happening in the body. By changing the conditions in this organ bath, she can observe how the mouse’s genes may protect the lining of the vessel from damage caused by diabetes; work that may lead to the development of new medicines. It is clear that Stacey enjoys her job - which has earned her a place on academic papers - and feels part of the team. 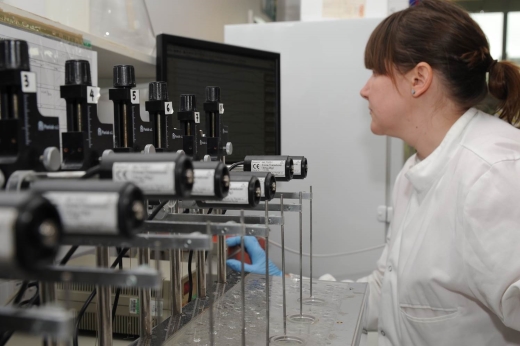 Stacey working on her organ bath.

It was while working in LICAMM in 2014 that she was contacted by a former colleague, Sarah Myers, who was looking at starting the Technicians' Network. When I asked Stacey what her role in the Network has been to this point: “I do the minutes” was her typically modest reply. However, the way she talks about the Network shows her commitment: “I’ve always felt that Technicians are the unseen people. They are the ones that do it. I’ve known academics say, ‘She’s just the bottle washer; she just does the washing up’. It was a two- tier system. I wanted to change that.”

Stacey's daughter recently started school making full-time work difficult. Lucky, she has been able to take advantage of a new policy allowing her to drop her hours for childcare, with the guarantee of increasing them  when she returns. This change in work encouraged her to make a increase her role in the Technicians' Network. With Sarah Myers thinking about taking a step back from organising the Network, this has come at a perfect time and Stacey has agreed to job share with Sarah.

Stacey explains how this is best of both worlds: “We get to keep Sarah and her knowledge. She does an awful lot of work that people don’t see.” Stacey is clearly excited about her new role and I for one want to wish her luck. If it all gets too much she can always retreat to her favourite place in the world, Arizona. She says: “It always calms me down when I go there. The heat, the landscape - I feel the stress going away.” Beats the chicken factory anyway!