Helen Sharman Operations Manager for the Chemistry Department at Imperial College – and astronaut.

Helen Sharman Operations Manager for the Chemistry Department at Imperial College – and astronaut. by kind permission of the IST 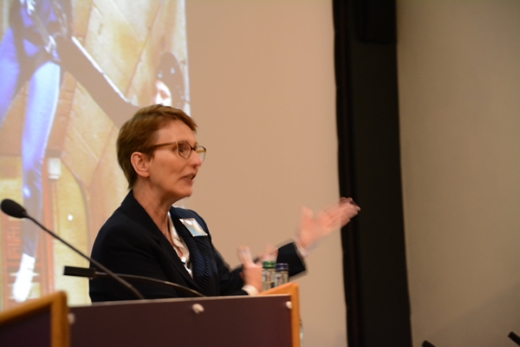 September saw members of the Technical community from the University cross the Pennines to Manchester to attend the IST Technical Conference, held at the Manchester Conference Centre. The conference was well attended by technical staff from all over the country; I even spoke to some technical managers who had flown down from Aberdeen for the day.

The first keynote speaker was the Vice-Chancellor of Manchester Metropolitan University, Professor Malcolm Press. He spoke about how technicians have always been an important part of research and science but that no-one can name a famous technician either from today or historically. Professor Press asked how we can redress that balance; possibly by a change in job title or through trying to achieve a better recognition in the academic world. All good questions but, despite an engaging discussion after the presentation, no quick answers were found.

There was a wide variety of workshops, including laboratory awareness, Health and Safety management to 3D printing, the categorisation of chemicals, protecting swimmers on English beaches, sustainable practices in the lab, managing personal development and, of course, career progression. There was also a series of lab tours round the high-tech Manchester Synthetic Biology Research Centre which were very interesting. The selection was diverse and it was hard to choose which workshops and tours to attend.

The part I was most looking forward to was the keynote speaker, British astronaut Helen Sharman OBE. Dr Sharman gave an interesting and entertaining talk on ‘Travels with a Space Technician’. The atmosphere in the conference room was electric as I think most people were just as excited as me to see her talk.  I was thinking how jealous my four-year-old daughter would be to know I was in the room with a real life astronaut! It was refreshing to see how she spoke of herself as a technician first and foremost - I always thought of her as an astronaut - and it seems that experiments can be just as variable in space as on Earth!

The organisation of the event was very good and I am already looking forward to next year’s conference, but I’m not sure who they can get to top Helen Sharman as the keynote speaker next year - Jane Goodall, David Baltimore or Stephen Hawking, perhaps?