37 student athletes have been presented with their University of Leeds Sport Scholarships for 2016/17. 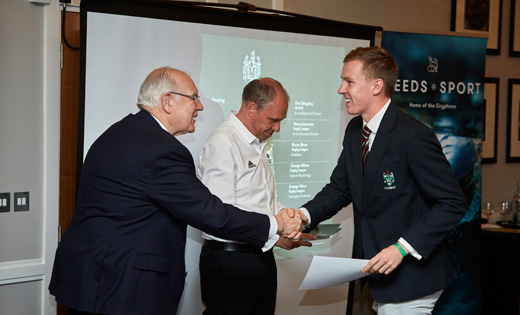 The students have been awarded a University of Leeds Sport Scholarship to support them in their aspirations to compete at the highest level alongside studying for a world class degree.

The University has a unique approach that tailors each scholarship to the needs of each individual athlete. Athletes have their own personal mentor to ensure they are achieving a balance between academic and sporting excellence. As well as a specific strength and conditioning programme, physiotherapy, free access to The Edge and a bespoke financial bursary.

Suzanne Glavin, Head of Sport & Physical Activity, said: “It was lovely to congratulate our scholars on being selected and to wish them all the best during their time as a Sports Scholar at Leeds.

Among the Sports Scholars selected this year are Sam Dickinson who trains as part of the world renowned Leeds Triathlon Centre alongside the Brownlee brothers. Sam has won 3 Junior European Cup races and placed 8th in the Junior World Grand Final 2016.

Jack Perry is also a Sports Scholar this year and plays Wheelchair Basketball for GB U20s, he is aiming to compete in the World Junior Championships next year.

A full list of the scholars can be found here.