The athletic ability of five University of Leeds sports stars will be tested to the limit during the Paralympics, which begin today in Rio de Janiero. 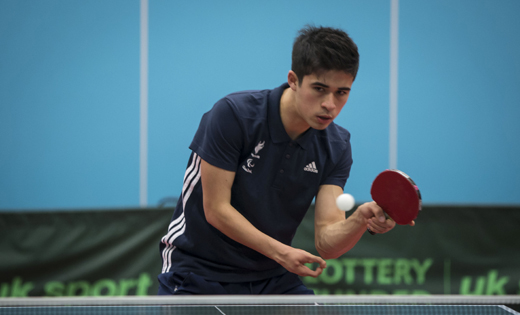 Competing as part of the Team GB squad is table tennis player and medicine student Kim Daybell, whose first heat is tomorrow, 8 September.

Kim will be used to the level of competition, having previously competed in the London 2012 Paralympic Games.

Speaking ahead of the tournament, Kim, 24, said: “I feel the best prepared physically and mentally that I can be going in to Rio.

"The experience of London is going to help massively. I thought I was ready for London but we’ve come a long way since then, particularly off the table.

“We’ve all got lots of expectations but I just want to go and do myself proud and my country proud. I want to play at the level I know I can play at and, if I do that, I don’t see why I can’t be in among the medals.”

With the support of the University, Kim has taken a year’s break from his studies to train full time for the Paralympics, which he says has given him extra confidence to challenge the top-ranked players in the sport. Also competing in Rio De Janiero this month are four Leeds alumni:

Wishing the athletes success, the University’s Vice-Chancellor Sir Alan Langlands said the University was proud they had been selected to represent the UK in the national squad.

Suzanne Glavin, the University’s newly appointed Head of Sport said: “We have a really strong team of Leeds athletes taking part in the Paralympics, so our hopes are high for success.

"All of our athletes have proved how it’s possible to reach the highest levels of their sport whilst working and studying and I wish them the best of luck during the next 10 days."

Ms Glavin, who before coming to Leeds held a senior role at Sport England, added: “I believe sport can impact significantly on an individual’s well-being, character and ability to succeed in life, so I’m sure our five Paralympians will be great role models for all students and graduates.”

More details about all the athletes and the University’s Olympic sportsmen and women, including gold medal winning Alistair Brownlee, can be found here.