Triathlon stars Alistair and Jonny Brownlee confirmed their status as the sport’s pre-eminent stars on the roads of Rio yesterday, claiming gold and silver in a highly convincing Olympic win. 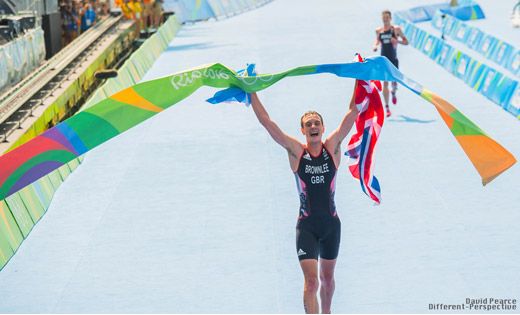 The brothers, who are both University of Leeds graduates, and who regularly train using campus facilities, performed strongly in the swim and the cycle sections of the race, before dominating the run and pulling away from the pack to complete the last two laps almost alone.

The third member of the TeamGB squad was Gordon Benson, who graduated from the University this summer with a BSc in Nutrition and was performing in his first Olympics.

Congratulating the brothers on their success, Sir Alan Langlands, Vice-Chancellor of the University of Leeds, said: “There could not be a better result for the Brownlees or for our city than seeing a Leeds gold and silver result in the triathlon.

“The University has played a significant role in their development and training since they studied with us, and I am delighted for both of them.

“I’d also like to pay tribute to Gordon Benson, who reached Olympic standard while studying for a demanding degree. He’s played an important role in helping the Brownlees achieve the success they have and deserves credit.”

Alistair Brownlee initially began his degree studies at Cambridge but moved to the University of Leeds to study Physiology and Sport.

This move was in order to focus on athletic training at the Leeds Triathlon Centre. He graduated in 2009 and now trains full time within the sport.

Jonny Brownlee completed a degree in History at the University in 2012, and the same year won the International Triathlon Union world title. He is also a member of British Triathlon Squad training at the Leeds Triathlon Centre.

During the race itself, the University’s expertise in sports was called upon several times by the media. Dr Mark Hetherington from the Faculty of Biological Sciences explained to Sky News how the on-campus Environment Chamber helps triathletes acclimatise to weather conditions similar to those in Rio.

Director of Sport Stewart Ross also gave BBC and Sky viewers an insight into how the brothers had controlled the race and how they had been supported to maintain their training whilst securing a respected degree.

Mr Ross also explained how the University was working with British Triathlon and Sport England to create what is believed to be the first centre in the world dedicated to elite level triathlon training.

Mr Ross said: “We will have the world’s first centre bringing together all three triathlon disciplines, which combined with the great coaches and clubs we have in Leeds will ensure we can sustain the city’s success in the sport into the future.”