Some of the most innovative examples of public engagement being developed at Leeds have been recognised at the inaugural Public Engagement with Research Awards. 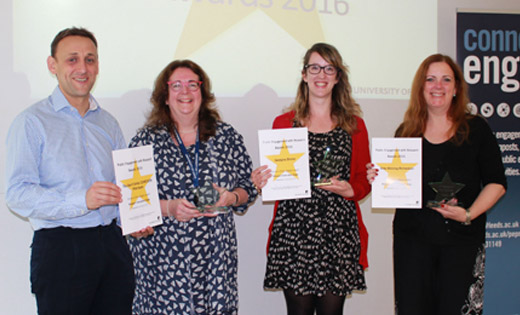 Entries came from a wide variety of public engagement (PE) and patient and public involvement and engagement (PPIE) initiatives and from across the University, and the award categories reflected all stages of the research project lifecycle.  The winners were:

Staff and students from the Schools of Dentistry and of Performance and Cultural Industries worked alongside the nationally-acclaimed Theatre of Debate and patient advisors.  The play, Don't Smile, was a love story with a dental theme, performed to schoolchildren.

The play and follow-up debates aimed to increase awareness of the genetic condition Amelogenesis imperfecta and to highlight the pioneering new treatments being developed in the School of Dentistry.  It was also used to get across some more day-to-day public oral health messages.

Audience feedback and surveys have enabled the dental students involved to shape the research design for a clinical trial grant application.

Outstanding PE/PPIE during execution of research

The scheme aimed to target loneliness amongst the elderly by matching them with students as pen pals.  At the start of the project, students were given copies of historic photographs of Yorkshire by the Library's Special Collections.  The students used these as conversation starters when beginning their correspondence with older people.

Outstanding PE/PPIE for the dissemination of research

Anke Brüning-Richardson - brain tumour awareness: Anke's aim was to awaken curiosity about what brain tumours are, the difficulty of treating them, and how this is tackled by research.

She created soft toys representing brain tumours and treatment regimes which young children could explore.  She also devised an activity for children which allowed them to pretend to be surgeons and to try to remove 'tumours' from swing bins: one made of playdoh and one made of a slime ball.  This enabled them to understand how difficult it could be for a surgeon to remove a diffuse tumour like a brain tumour compared to a solid tumour.  After getting the children interested, Anke was then able to begin talking to their accompanying adults about how her research is trying to tackle some of the problems of treating brain tumours.

Anke is one of the University's 2015-16 Engagement Excellence Fellows.