Twelve significant individuals from the disciplines of law, education, film, science and engineering will be presented with honorary degrees recognising their contribution to their fields and society. 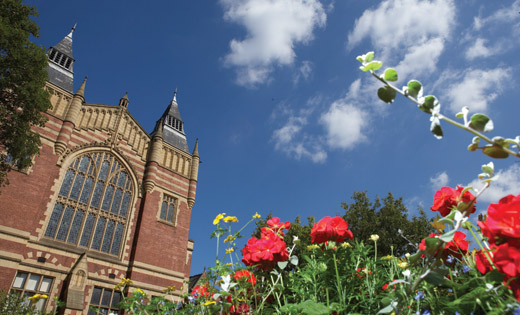 An honorary degree is regarded as one of higher education’s most prestigious awards and each year the University carefully elects notable recipients.

The awards will be presented at the University’s degree ceremonies, which will take place in the Great Hall from 11-22 July 2016.

The recipients of honorary degrees this year are:

Mrs Sutcliffe is currently the Chief Inspector of Adult Social Care at the Care Quality Commission (CQC). She leads the inspection, regulation and development of 25,000 care homes, which provide care for over 400,000 people. With nearly 30 years of health and social care experience, Mrs Sutcliffe has previously held positions including Deputy Chief Executive of the National Institute for Health and Care Excellence (2001-2008) and Chief Executive of the NHS Appointments Commission (2008-2012), before moving to the CQC in 2013.

Dame Athene has been Master of Churchill College, Cambridge since 2014. In addition she is Professor of Experimental Physic at the University. Dame Athene was elected as President of the British Science Association in 2015 and is a leading advocate for better representation of women in science. She has been a Fellow of The Royal Society since 1999 and is a member of the Scientific Council of the European Research Council, along with being a Trustee of the Science Museum Group. Dame Athene has published over 250 papers in her field of expertise and is a regular contributor to both national and international debates about science.

Sir Christopher is an eminent engineer and academic who attained both his undergraduate and postgraduate degrees from the University of Leeds. Sir Christopher’s pioneering work on transistor designs paved the way for his election as a Fellow of The Royal Society. He was awarded a Silver Medal in 2004 by the Royal Academy of Engineering for his vital contributions to the UK's microwave and semiconductor industry. Sir Christopher is Vice-Chancellor of the University of Southampton and was knighted in 2012 for his services to engineering and higher education.

Professor Fisher joined the University of Leeds in 1988. He was appointed as Pro-Vice-Chancellor for Research in 2001, becoming Deputy Vice-Chancellor in 2006. In addition to his leadership roles he maintains an exceptional research career in tissue re-engineering and joint replacement. Under his leadership, the University's Institute of Medical and Biological Engineering is regarded as one of the world’s most successful research institutes in its field. Professor Fisher is a Fellow of the Royal Academy of Engineering, the Academy of Medical Sciences, the Institution of Mechanical Engineers and the Institution of Physics and Engineering in Medicine.

Professor Slingo is one of the leading figures in tropical climate variation. Her expertise lie within atmospheric physics, climate science and the impact of climate change. Professor Julia Slingo is currently the Met Office’s Chief Scientist and has had a significant influence on the UK’s national policies for science. She has made a number of ground-breaking discoveries, particularly into monsoons in China and India. In 2014, Professor Slingo was made a Dame Commander of the Order of the British Empire for her invaluable contribution to climate science. The following year she was elected as a Fellow of The Royal Society.

Ms Hutchinson is a University of Leeds alumnus and has since become one of the UK's leading matrimonial lawyers. As a partner and head of the children’s department at the family law firm, Dawson Cornwell, Ms Hutchinson specialises in all aspects of domestic and international family law. She was presented with the inaugural Unicef Child Rights Lawyer Award in 1999, and was made an Officer of the Order of the British Empire (OBE) in 2001 for her services to international child abduction and adoption. Ms Hutchinson is Chair of Trustees for Reunite International, a leading UK charity focused on the safe passage of children across international borders.

Mr Morgan is a graduate of the University of Leeds and one of the country’s leading contemporary screen dramatists, famed for his films concerning high profile figures from The Queen to Richard Nixon. He is known for shining a light on key moments in history and in 2006 received a Golden Globe for The Queen and a BAFTA in 2007 for the screenplay for The Last King of Scotland. Mr Morgan went on to receive an Oscar nomination in 2009 for his first play, Frost/Nixon. His other film credits include The Damned United, depicting Brian Clough’s 44 day reign as the coach of Leeds United. Along with film, Mr Morgan is also an acclaimed playwright and has enjoyed success in both West End and Broadway prodcutions.

Professor Jackson is a Leeds graduate and is the Fredrick James Quick Professor of Biology at the University of Cambridge. In 1997 he founded KuDOS Pharmaceuticals, acquired by AstraZeneca in 2005, to translate knowledge of DNA damage response pathways into new treatments for cancer. Professor Jackson established a second company in 2011, Mission Therapeutics, which focused on the ubiquitin pathway to treat cancers and other life threatening diseases. Professor Jackson is an elected member of the European Molecular Biology Organisation, the Academy of Medical Sciences and is a Fellow the Royal Society.

As Pro-Vice-Chancellor for Student Education at the University of Leeds for the past decade, Professor Jones has been responsible for the academic and co-curricular experience of all students. She has championed the interests of students and her enlightened approach to education has guaranteed that the University remains at the forefront of developments in teaching and learning. Along with serving as Pro-Vice-Chancellor, Professor Jones also teaches Eighteenth Century Gender and Culture within the School of English. Professor Jones is a Fellow of the English Association and has served on the executive committees of the British Association for Romantic Studies and University English.

A Leeds graduate, Professor McGregor has won multiple awards for choreography and directing, and is Professor of Choreography at Trinity Laban Conservatoire. He was the first contemporary choreographer to be appointed as the Resident Choreographer of The Royal Ballet in 2006. His work has been re-staged and performed by companies including Paris Opera, New York City and Bolshoi ballets, while his ensemble of dancers, Company Wayne McGregor, is resident at Sadler’s Wells Theatre in London. In addition his work has featured in popular culture including in the Harry Potter films, and in music videos. His installations at the Houses of Parliament, the Saatchi Gallery and the Centre Pompidou in Paris are internationally distinguished. In 2011 he was made a Commander of the Order of the British Empire (CBE) for his services to dance.