Feasting monks and strange foods: all you'd want to know about medieval food 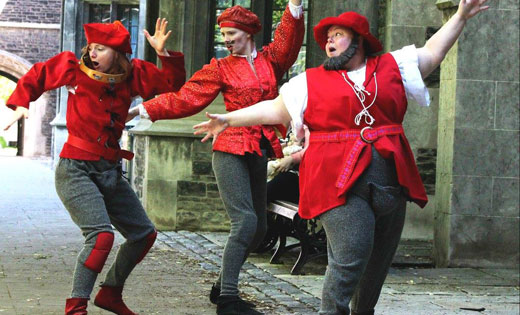 Organised by the Institute for Medieval Studies (IMS) at the University, the IMC is Europe’s largest annual conference for researchers in medieval studies. More than 2,200 researchers will gather on campus to attend over 500 available sessions of academic papers, with the focus this year on 'Food, Feast and Famine'.  Topics range from medieval cookbooks to the importance of ale in Viking life and famous poisonings in the Middle Ages.

But the IMC is not just for scholars.  A variety of exciting medieval-themed events will be running for members of the public too.  There will be trips to local medieval sites and a host of activities such as feasts and performances.

‘Making Leeds Medieval’ takes over University Square on Thursday 7 July with a host of combat displays, birds of prey and demonstrations from the King Edward’s Living History Group to give you a taste of medieval life. There will also be a wide range of food vendors, including the ever-popular hog roast, and you could even have a look around the Medieval Craft Fair.  For book-lovers, there’s also the Second-hand and Antiquarian Book Fair.

The week kicks off on 3 July with ‘Medieval Day at the Museum’ (12-3pm), a free public event at Leeds City Museum where you’ll be able to try a wide range of family-friendly crafts and activities such as book-binding, writing with quill and ink and medieval board games.  Leeds professor Catherine Karkov will also give a talk (3pm), ‘Fabulous Creatures: Jewellery in Anglo-Saxon England’, delving into the history and importance of the West Yorkshire and Staffordshire Hoards. Both treasure hoards are currently on display in Leeds.

Food demonstrations will take place every day (10am-5pm), in keeping with this year’s theme of Food, Feast and Famine. Using medieval techniques and cooking equipment, you’ll be able to learn about spices in medieval food, churn your own butter and even try making sweets and bread in a medieval oven.

If you’re on campus, stop by Stage@Leeds to see ‘Later Day Saints’ – an exhibition by Lancashire artist Alan Birch which takes the medieval idea of saints and saintly veneration for a modern-day audience. Other free events include a performance of the raucous 15th-century play Mankind by Canadian theatre company Poculi Ludique Societas (Wednesday, 7pm), and you could experience the Traditional Music session (Thursday, 8pm).

Spinning workshops, chanting from 14th-century manuscripts and the Medieval Feast are all also open to the public.

Tickets for these events and for excursions to nearby medieval sites can be purchased through the Institute for Medieval Studies webpages, but hurry – events are filling up.