A technology start-up, launched with the help of SPARK, the University’s business start-up service, has won first prize in an international competition for its end-of-shelf-life advertising platform. 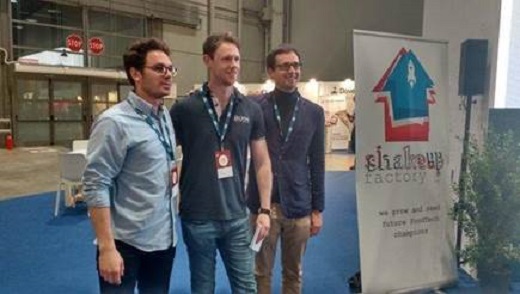 The competition was part of a global future of food innovation summit, Seeds and Chips, that brings together start-ups, investors, thought leaders and policy makers to share innovations and ideas around food production.

Called YellowLabel, the Leeds start-up is aiming to create the first real-time advertising platform that will allow supermarkets to reduce food waste and promote convenient access to cheaper goods for customers.

The scheme alerts users when local supermarkets have discounted food for sale which is nearing its sell-by date – saving customers money and reducing the amount which would have to be thrown away.

Leeds graduates Toma Paro, Sam Patchitt and Richard Torpey, set up the company to help satisfy an increasing appetite for technologies that can help cut down on food waste. Working with SPARK, the team were able to get advice and some financial support to form the company, build a prototype system and start to verify their market.

SPARK also helped them put the pitch together for the Seeds and Chips competition which was sponsored by Shakeup Factory, an Accelerator that focuses on the future of food technologies. Their prize includes €10,000 and a three-month place on Shakeup Factory’s accelerator programme, to enable the team to get the business ready for larger investment.

“Our idea is quite simple, but we think it’s going to have a big impact on food retail in the UK,” says Toma. “The aim is to reduce costs for shoppers, but there’s a strong social responsibility angle as well because we’re aiming to reduce the overall amount of food that supermarkets have to simply throw away at the end of each day.

“The Seeds and Chips prize money, together with the accelerator programme means we can build a fully-functioning prototype of the system and start talking seriously with supermarkets and potential investors later this year.”