Astronaut Piers Sellers – a climate scientist and a Leeds alumnus – supported the launch of the Priestley International Centre for Climate. 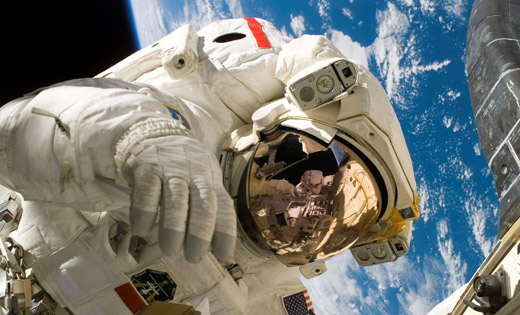 The Priestley Centre is one of the University’s flagship strategic investments, with more than £6 million invested in it over the next five years.  The Centre will move into a new dedicated building space due to open in 2018.

The launch event for the Priestley Centre included an afternoon session for University staff, PhD students and invited stakeholders, followed by an evening Climate Question Time that was open to the public.

Vice-Chancellor Sir Alan Langlands said: “The University receives one of the largest annual incomes in the UK for environmental research, including more than £20 million of funding for climate change research.

“The University is also one of the country’s top institutions for climate research and we are proud to be leaders in facing the challenge of ensuring a healthier, more sustainable planet for future generations."

Piers Sellers supported the event: he gained a doctorate in biometeorology from the University in 1981 and was made an honorary Doctor of Science in 2007. He is part of an elite group of people to have walked in space, offering a special perspective on how fragile our planet is.

In honour of Dr Sellers’ work as a renowned climate scientist and in raising public awareness of global warming, the Priestley Centre has created two annual prizes in his name to recognise outstanding research in the field. The inaugural Piers Sellers Prizes was awarded at the afternoon session of the launch event.

In the evening, a special Climate Question Time event, addressed the question ‘Are there achievable solutions for limiting climate impacts at 1.5°C level?', following the global climate deal that was agreed in Paris in December 2015 and adopted by 195 countries.

Professor Piers Forster, the Director of the Priestley Centre, said: “The topic of the Climate Question Time is not only timely, but resonates with the vision for the Priestley Centre to be a world-leading centre for policy-relevant, solution-driven climate research.”