A technician from the Faculty of Biological Sciences found a way to help with the Ebola epidemic - he went to Sierra Leone to work in a diagnostic laboratory testing for the virus.

Carsten staying safe in the laboratory 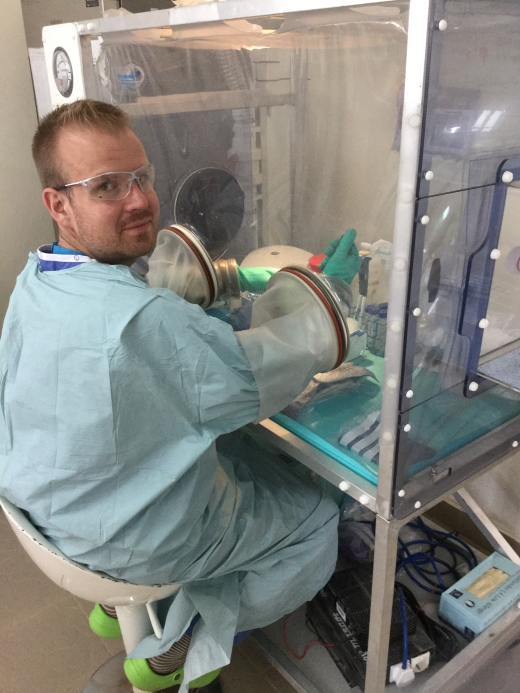 Many of us sit at home watching tragedies unfold on the television news and feel so helpless in the face of foreign wars, natural disasters, and disease. But Carsten Zothner of the Faculty of Biological Sciences found a way to help. He went to Sierra Leone to work in a diagnostic laboratory testing for Ebola. As he said: “I thought that I can contribute something I can actually already do.”

In March 2014 the first cases of Ebola were discovered in West Africa and arrived in Sierra Leone in May. As the disease spread the international community stepped into help and Public Health England set up three diagnostic testing laboratories and, needing experienced laboratory workers, they sent out emails asking for volunteers. One of these emails arrived in Carsten’s inbox via his boss.

Carsten knew that he had the necessary experience after working in laboratories both here and in Germany. However, he was understandably unsure about travelling to an Ebola-hit developing country. This changed when some of his colleagues went – and more importantly returned safely. So, in mid-September 2015 after one week’s intensive training at Portland Down he took the seven hour flight to Freetown to spend five weeks working in a laboratory. 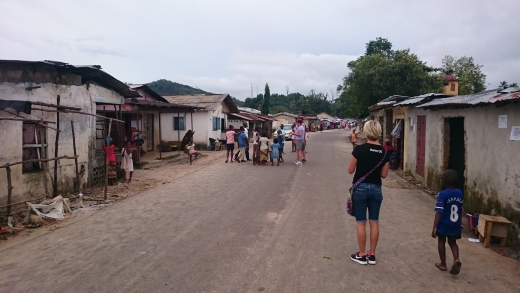 He said: “When I arrived, I wasn’t expecting that the hotel accommodation would be so nice. They had beautiful long beaches and great water. Obviously, they were trying to get tourists in and then Ebola hit and everything went down the drain again.” Carsten and his three fellow team members stayed in a hotel taken over by non-governmental organisations (NGOs) in a village called Tokeh. However, he described it a as bit of a “gilded cage” as he could not walk around alone on the beautiful beaches or around the noticeably poor village. 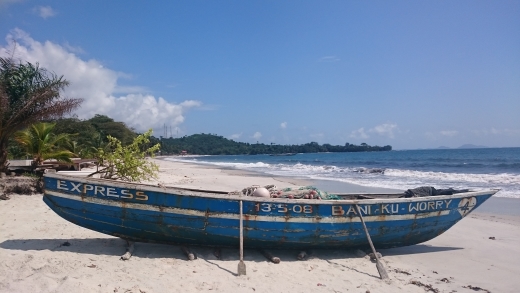 Each morning the team would set off in a private bus at 8am to the Ebola Treatment Centre in Kerry Town, a small jungle village where the laboratory had been set up. Carsten explained: “You get thrown in at the deep end - that was one of the scariest things. There is no-one permanently there that can help you. You get all the standard operating procedures, you get the training, now put it into practice it here! This meant that for the first week, the team was working full 12-hour days and 6-day weeks. However, as the team grew more experienced, they developed more manageable routines.

"Although the laboratory work got easier, it was still stressful and emotional at times. Each sample had to be entered into a database so you could be entering information about a dead mother and one-day-old child. Other samples came from people with suspected Ebola where mixing samples up would have real repercussions. You don’t want to make someone falsely positive, they would be put in a treatment unit with Ebola victims and they would probably contract it there.  Alternatively, a false negative could mean someone with Ebola being allowed to return to their community."

Samples were processed in a glovebox and the virus RNA was tested for Ebola using RT-PCR. After testing, the results were recorded on the database and everything was disinfected. In fact, the lingering impression from Carsten’s story is the smell of disinfectant. The team’s first job each morning was to make up large quantities of bleach to use throughout the day. Carsten said: “The chlorine smell was horrendous. When I went in there the first day my eyes were tearing all day. All the processes were designed to keep you very safe, but all of the personal protective equipment - including three pairs of gloves - made for really hot work."

For all the difficulties of being away from home and the stressful environment, Carsten noted that Sierra Leone has still not been declared Ebola-free and put out this plea: “They are still looking for people and I would definitely recommend it as an experience.”

Now back in Leeds, Carsten can be found in the Faculty of Biological Sciences, where he is a laboratory manager in Virology. If you want to get involved in something like this, Carsten is very willing to talk to you about his experiences.