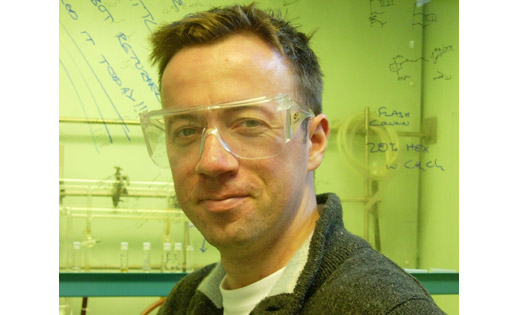 Professor Wilson has been recognised for his work in promoting the importance of interdisciplinary research between chemistry and the life sciences through independent work.

Drugs function by binding to a protein target within the body. Most existing small molecule drugs bind to well-defined pockets in proteins – analogous to a key fitting into a lock. However, Professor Wilson’s research team at the University is developing drugs used to inhibit protein-protein interactions involved in cancer development and progression. These drugs require a fundamentally different interaction of the drug with its protein target – like a hand gripping a ball.

The award is named in honour of Norman Heatley, a chemist who unlocked the potential of penicillin as a cure for bacterial infection through his work in developing culture methods for penicillium and promoting the mass production of the drug.

Speaking about his research, Professor Wilson said: “Using this concept, we have developed inhibitors of protein-protein interactions involved in cancer development and progression. Such inhibitors have also been shown to highlight potential new approaches for therapy and could form the starting point for drug-discovery initiatives.

“I am delighted to receive this prestigious award and it is fantastic that the work I have pursued with my co-workers and collaborators has been recognised by the Royal Society” continued Wilson. “Developing approaches for inhibition of protein-protein interactions is an enormous fundamental challenge of huge importance to future healthcare provision. The award recognises the importance of this topic within the wider scientific community and I look forward to sharing my groups’ most recent developments and vision for progressing this science during the lecture tour.”

Professor Wilson, who lectures in the School of Chemistry and is now Deputy Director of the Astbury Centre for Structural Molecular Biology and is also co-director of PPI-Net.