Children from the age of seven are being encouraged to aim for a place at University, by attending after-school classes at a new centre in Beeston, Leeds. 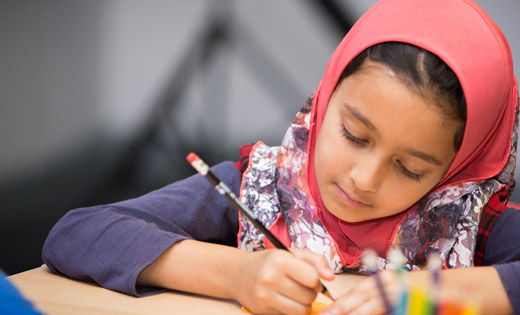 The centre, run by national education charity IntoUniversity, has been opened in partnership with the University with the support of a £345,000 grant from the Asda Foundation and funding from The Queen’s Trust. The centre is working with children from primary school upwards to raise both their attainment and aspirations.

Based at Hillside in Beeston Road, the centre is already working with four primary schools and three secondary schools in the city and has seen dozens of families sign their children up to receive this valuable extra support. Sessions for around 30 children at a time are run after school, while centre staff visit schools during the day.

“The community has been really welcoming,” said centre leader Ellie Rowley. “We have been fully subscribed from the start. All the organisations which work with young people in this area have been really supportive of what we are doing.”

Schools which are taking part include Hunslet Moor, Hugh Gaitskell, New Bewerley and Greenmount primaries, Lawnswood and Cockburn high schools, the South Leeds Academy and the Elliott Hudson College. “We are so proud that this partnership is benefiting the community and the city of Leeds,” she added.

The Beeston scheme builds on the success of similar centres, all in areas of social deprivation, which have been established by national charity IntoUniversity, and follows the opening of the East Leeds centre in Harehills in 2014.

They are badly needed. Around 12 per cent of children from Leeds who are entitled to receive free school meals go on to university, compared to a national figure of 32% of pupils on free school meals. But when children from similar backgrounds have been through IntoUniversity programmes across the UK, the figure rises to a staggering 71%.

The new centre is close to the headquarters of supermarket chain Asda and has been supported by a substantial donation from the Asda Foundation, their charitable foundation which makes independent grants throughout the UK. Alex Simpson, General Counsel and Chair of the Asda Foundation said “This is the biggest commitment made by the Asda Foundation to date in Leeds, so we are delighted to support and fund this project, which will see IntoUniversity help children and young people to achieve a university place or to better their education. Supporting projects like this and helping develop the potential in young children is really important to us – and we hope it will make a real difference within the local community in Leeds.”

It brings the number of IntoUniversity centres in the UK to 21. The charity’s Chief Executive and Co-Founder Dr Rachel Carr OBE said: “We are proud to be opening our second IntoUniversity centre in Leeds. IntoUniversity works with children and young people over the long term to inspire them to achieve a university place or another chosen aspiration. In Beeston this work is already well under way thanks to our partnership with the University of Leeds and the support of our corporate, trust and foundation partners who have joined us to make this local learning centre a reality. We look forward to seeing hundreds of young people take advantage of the exciting opportunities which the IntoUniversity Leeds South centre has to offer.”

For the University, the centre represents an important aspect of its work in ensuring that people of all backgrounds should be encouraged to aim for a place in higher education. Vice-Chancellor Sir Alan Langlands said: “We want to raise aspiration and ambition and support young people, no matter their circumstances or their background. The IntoUniversity centre is preparing children from a very young age, raising their aspirations and giving them the confidence to think that university could be a real option for them.”