An exhibition celebrating the major contribution to public art in post-war Britain of American sculptor Mitzi Cunliffe opens at the University on 30 March. 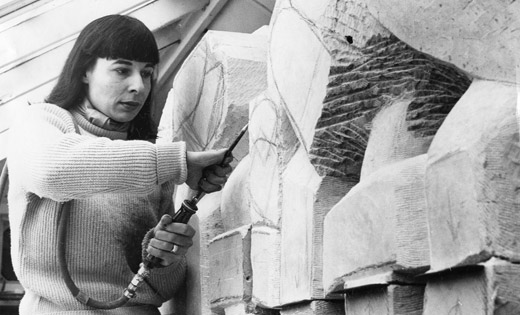 She created the famous BAFTA mask trophy that has been awarded to the great and the good of the film and TV worlds for more than 60 years. But some say the work of sculptor Mitzi Cunliffe has been overlooked ever since.

Now the University of Leeds hopes to redress this by collaborating with the American artist’s daughter to create a new exhibition of her work, opening on Wednesday 30 March: Sculptor behind the Mask: Mitzi Cunliffe’s work of the 1950s.

Painter and Royal Academician Stephen Farthing curated an exhibition of Cunliffe’s work in Oxford in 1994. He said Cunliffe, who lived in the North of England for much of the 1950s and 60s, was well ahead of her time.

“Mitzi Cunliffe wasn’t fortunate enough to live at a time when the art world was interested in a female American artist making sculpture in a garage in Didsbury, let alone the very real or possibly just imagined performative element in her work,” he said.

“Today, in my story of art, she would hang in the same gallery as Lady Gaga, Marina Abramovich, Jackson Pollock and possibly Barbara Hepworth. It was her ability to take a classical education and make it look towards the future that convinced me she should be part of the curriculum.”

Cunliffe’s elder daughter Antonia Cunliffe Davis has been working to raise awareness of her late mother’s artistic legacy for more than 20 years.

She said: “After all this time, I hope this mission will finally come to fruition and that the exhibition at Leeds will help get her the recognition she deserves.”

This year the University celebrates the 60th anniversary of one of Cunliffe’s most important 1950s public sculptures – Man-Made Fibres, a huge Portland stone sculpture on the Clothworkers' South Building. The sculpture features two monumental hands with a striking weave motif cradled between them, reflecting the exciting developments in synthetic fibres that the new building represented. The University remains proud of its roots in Yorkshire’s textiles industry.

At the same time she was working on this, Cunliffe was commissioned by the then Guild of Television Producers to design the BAFTA award, which was presented for the first time in October 1955. Man-Made Fibres was unveiled by the Princess Royal – then Chancellor of the University – in June the following year.

The new exhibition, at the University’s Stanley & Audrey Burton Gallery, considers Cunliffe’s career in public art and as a designer of ceramics and textiles in the 1950s, when she created the famous BAFTA trophy – on loan will be the very first iconic mask produced.

The show has been curated by art historian Professor Ann Sumner, the University’s Head of Cultural Engagement, who said: “The exhibition concentrates on Mitzi Cunliffe’s major public art commissions, including her little-known contribution to the Festival of Britain, which launched her career in this country, as well as commissions for other Universities such as Liverpool, for schools in Manchester, her frieze for the Heaton Park Pumping Station, also in Manchester, and the remarkable War of the Roses screen in Lewis’s department store in Liverpool.  The 1950s were extraordinarily prolific years for her.”

The Leeds exhibition will focus on the Man-Made Fibres sculpture, culminating in the 60th anniversary of the building on which it sits, on 29 June.  Items on display – some for the first time – will include Cunliffe’s original maquettes (preliminary models), photographs, letters, drawings, textiles, ceramics and exhibition catalogues.

As part of the year’s events to celebrate Cunliffe’s association with the University, Man-Made Fibres is being conserved, and new public art will be commissioned in response to it.