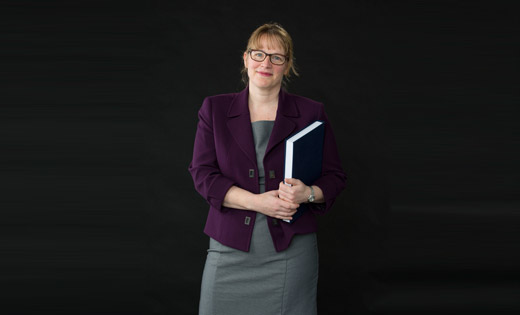 Professor Alison Fell leads the 'Legacies of War' project at the University, working with a large team and a range of external partners including Leeds Museums and Galleries, the Imperial War Museum, the Heritage Lottery Fund and the BBC.

Funded by the Arts & Humanities Research Council, Wellcome Trust and the Leverhulme Trust, the project works with members of the public through a series of highly successful public engagement events, which have involved the public in contributing actively to research about the First World War and its legacies.

Work led by Alison on the experiences of Leeds’ residents during the war recently culminated with the addition of 25 names to the University's war memorial in Parkinson Court. Professor Fell said: “One of the most fulfilling parts of the project has been seeing others develop their own career paths and skills because of the opportunities the project has given them.”

Professor Fell was also one of the winners of the 2015 Vice-Chancellor's Impact Award for the Legacies of War project in the Arts and Humanities category. The research and public engagement project explored five aspects of the First World War: Yorkshire and the War, War and Medicine, Culture and the Arts, Resistance and War and Science and Technology.

The project focused on work with key partners and community groups: the team worked with over 40 community groups, ranging from a homeless people’s theatre group, to schools and local history groups.  Through public events, exhibitions and educational work, the project team shaped the way the city of Leeds and the region marked the centenary of the First World War and encouraged greater public use of archives, libraries and heritage sites.