Professor Rick Jones, who influenced the modernisation of pathology in the NHS through his enthusiasm for health informatics, has been posthumously honoured by the University. 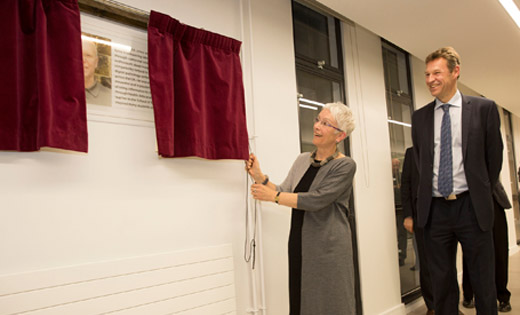 Professor Jones, who died in 2014 after a long illness, had international reputation for academic leadership, clinical excellence and high impact research.

Colleagues gathered to inaugurate a room in his honour in the Leeds Institute of Data Analytics, which is based in the School of Medicine.

Professor Paul Stewart, Dean of the Faculty of Medicine and Health, said: “The recent success of the University in the development of data analytics in the health domain, including the establishment of the Medical Research Council Centre in Medical Bioinformatics in the School of Medicine, was due in large part to Rick’s vision and unswerving commitment.

“It is a privilege to inaugurate this room in the presence of more than fifty of Professor Jones’s close colleagues from the University, the NHS and members of his family to mark this special occasion.

“The ‘Rick Jones Education Room’ is named in honour of a man was an excellent and enthusiastic teacher with a strong belief in research-led education. Rick was tireless in his pursuit of academic excellence and innovation, setting – and invariably achieving – exactingly high standards in every project that he undertook.”

Professor Jones and his family came to Leeds in 1983, after beginning his career at the Radcliffe Infirmary and John Radcliffe Hospital in Oxford, where he had been a student at Corpus Christi College.