A Head of Cultural Engagement has been appointed at the University as part of preparations for its forthcoming Cultural Institute. 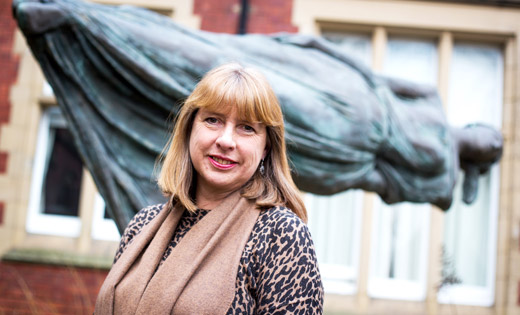 The Cultural Institute, due to formally launch later this year, is the first of its kind in the North. It will provide a platform for arts and science collaboration, working with creative sector partners and the University’s rich cultural resources to benefit society through the creation, application and distribution of cultural knowledge.

Professor Ann Sumner has been appointed to the new role, to work with Sue Hayton, the institute’s Associate Director, as well as Dean of Arts Frank Finlay and Dean of Performance, Visual Arts and Communications David Cooper.

Professor Finlay said: “Many colleagues will know Ann from the excellent work she has been doing for the University to promote its public art. She brings with her a wealth of relevant experience and expertise, not least as a former Director of Birmingham’s Barber Institute.”

Sue Hayton said: “Ann’s role is vital in our plans to provide one point of entry for culture-related research, cultural production and to open up the campus to new audiences.”

Professor Sumner said: “I’m delighted to have been appointed to this new role at such an exciting time and look forward to working with colleagues across the University and with our many partners beyond campus regionally, nationally and internationally.

“I’ve enjoyed my time at Leeds thus far enormously and am enthusiastic about tackling the opportunities for wide cultural engagement ahead. We have such a wealth of cultural attractions on campus.”

Professor Sumner has spent the past year heading up the new Public Art Project, which included the launch of a public art trail around campus, organising a successful symposium, workshops and a programme of events, curating a forthcoming exhibition about American sculptor Mitzi Cunliffe, and planning an interdisciplinary Yorkshire Year of the Textile programme to celebrate the rich textile history of the University and wider region.

She will continue to be the strategic lead on the Yorkshire Year of the Textile Public Art Project and will be closely involved in its delivery.

The recruitment process for a Director for the Cultural Institute will begin shortly.