Stephen Burgess a Mechanical Engineering Technician has won the Outstanding Apprentice Award from the Institute of Science and Technology (IST).

Stephen receiving the award from Terry Croft, MBE, FIScT, CEO and Chairman of the Institute of Science and Technology, at the IST conference in Leeds. 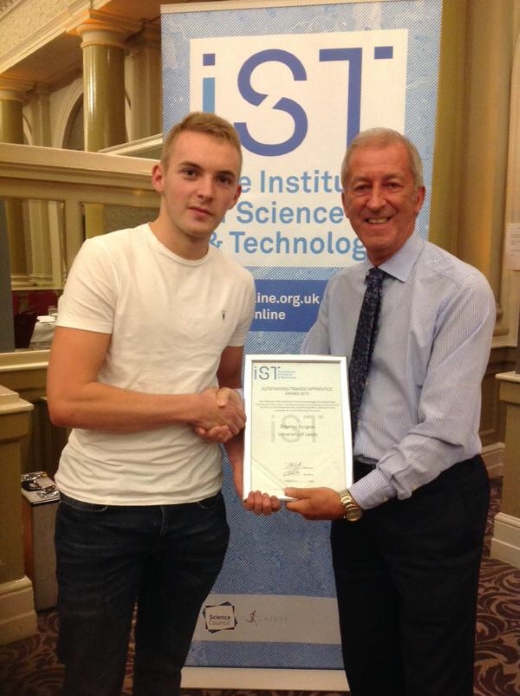 Stephen, a Mechanical Engineering Technician in the School of Earth and Environment (SEE), won the Outstanding Apprentice Award at the IST annual meeting last autumn.  He works in the Engineering workshop in SEE and was nominated for the award by Antony Windross, Instrument Workshop Manager.

When I talked to Stephen he was modest about his achievement, initially putting it down to luck. However, when pushed he told me: “It was due to my commitment to the workshop and my work at college – I’ve got good grades every time.” One of the projects that contributed to his award was building a two-axis motion stabilising platform for highly sensitive scientific equipment. This was for a large scale research project; the platform had to operate for three months on an ice-breaking ship sailing the rough seas around Alaska and Norway.

Stephen is now working full time within SEE and clearly enjoys his work: “It is a really wide ranging job, supporting academics with research. Designing, manufacturing and maintaining whatever they need for their research commitments. The good thing about working here is that there is loads of variety in what you do. Every day is a different job. I worked in industry before where you’d have 300 drills to grind and would stand at the machine for a fortnight.”

The award clearly meant a lot to Stephen: “It is really pleasing that the hard work that I am putting in is being recognised by my employer and the Institute.” It is an achievement he was delighted to share with his partner and young son. 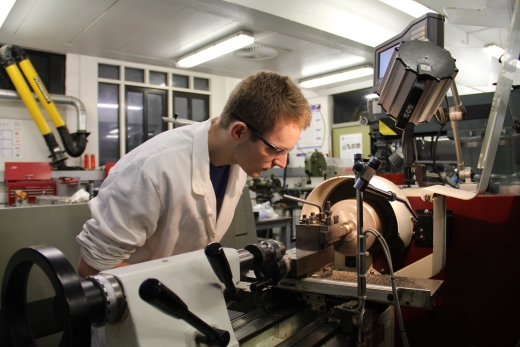 Written by Andy Connelly
If you would like to highlight a colleague’s achievement in the next issue, please get in touch.