Leeds played host to Sir Mark Walport, the Government’s Chief Scientific Adviser, and Gareth Davies, Director General for Business and Science at the Department for Business Innovation and Skills. 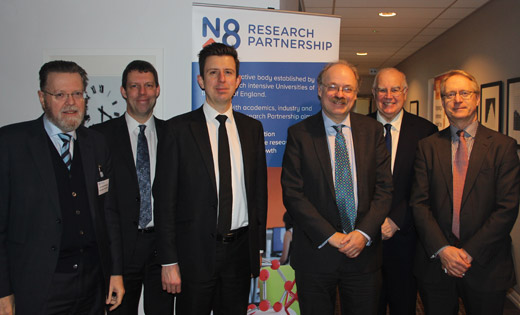 The event was the third in a series of Northern Innovation Forums focussing on the potential Northern Innovation groupings. This series is organised by the N8 Research Partnership (N8), the collaboration body of the universities of Durham, Lancaster, Leeds, Liverpool Manchester, Newcastle, Sheffield and York.

In a series of workshops Sir Mark and Gareth met with consortia leaders including senior representatives from the northern Local Enterprise Partnerships and N8 universities, were able to present their ideas on local and regional science and innovation strengths, and to seek input on how best to refine their plans. Representing the University were Vice-Chancellor Sir Alan Langlands, Professor David Hogg, Pro-Vice-Chancellor for Research and Innovation; Dr Ceri Wiiliams, Director of Innovation and Enterprise Partnerships; and Deput Vice-Chancellor Professor John Fisher.

Last autumn, Business Secretary Sajid Javid MP announced that the government was inviting organisations to form into consortia and express an interest in completing a Science and Innovation Audit (SIA). These consortia could include universities, research and innovation organizations, Local Enterprise Partnerships or their equivalents in the devolved administrations, and city and business leaders.

The SIAs provide a way to help build evidence of potential global competitive advantage, and to identify routes to fully realise that potential. Government has given a deadline of end of January for expressions of interest.

Sir Alan Langlands, who is also Chair of the N8 Research Partnership, said: “Evidence-based targeting of science and innovation investments can support regional economic development. UK science and innovation funding will continue to be allocated on a national basis to very strong proposals only. In that light, Science and Innovation Audits offer a real opportunity to strengthen the evidence base and our detailed understanding. This will lead to a greater ability to demonstrate Northern research and innovation excellence in themes and localities that can deliver economic impact.

“This day provided a great opportunity to refine and improve potential Northern SIA bids. It has enabled consortia to refine their ideas, cross-reference their bids with others, and investigate collaboration opportunities. We are delighted that Sir Mark and Gareth were able to join with the Northern consortia for this event.”