A public lecture by a Nobel prizewinner capped a successful two-day Symposium celebrating the life and work of Leeds Professor of Biochemistry and founding member of the Astbury Centre, Steve Baldwin. 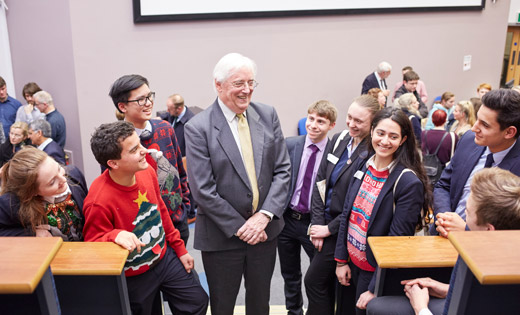 The symposium attracted around 140 chemists, physicists and biological scientists from around the world, many of them former students and postdoctoral researchers supervised by Professor Baldwin.  The sessions, exploring various aspects of the study of membrane protein structure and function, reflected the breadth of his collaborative work.  Speakers included outstanding leaders in the field, such as:

Alongside the main symposium sessions, Leeds students and postdoctoral researchers organised an afternoon programme of events for A-level students from Yorkshire.   Around 50 pupils were introduced to the work going on at Leeds through poster displays and laboratory tours.  They saw the freezing effects of liquid nitrogen on biological materials and were introduced to X-ray crystallography with a live demonstration of crystal formation.

Academics and school pupils alike came together for a lecture by the Nobel Laureate, Sir John Walker FRS, who is originally from Yorkshire.  Sir John talked about his research into the mechanisms our bodies use to produce energy from the food we consume, and then went on to discuss some of the major scientific challenges facing future generations, including antibiotic resistance and global warming.

Professor Peter Henderson from Leeds’ Astbury Centre for Structural Molecular Biology said: “The Symposium was a tremendous success.  The range of the sessions and the fact that researchers had come from across the globe to attend were testament to the wide impact of Steve’s work and to his popularity as a colleague and collaborator.  We hope that the lecture by Sir John Walker, who knew Steve, inspired some of the young students to try to follow in his footsteps.”