Dr Bradter’s three award-winning photos were all taken during a four-week holiday in Namibia, southwest Africa.

Her shot of an oryx (Oryx gazella) in the dusty haze of the Nambian desert was voted overall runner-up by the competition’s judges. 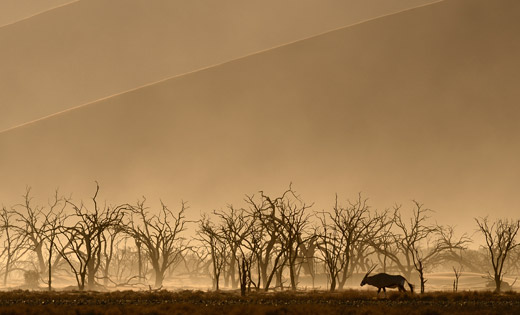 Dr Bradter said: “The oryx suddenly appeared and I framed it in front of the tallest dunes, because I wanted to emphasize the beauty and harshness of the desert environment in which it manages to live.”

Her image of an orange-eyed Cape glossy starling (Lamprotornis nitens) sneaking a drink from a dripping tap also won the prize in the Ecology and Society category. Although initially disappointed that the broken tap was leaking precious water, Dr Bradter was cheered to see the birds using it as a life-giving water source in their dry desert habitat. 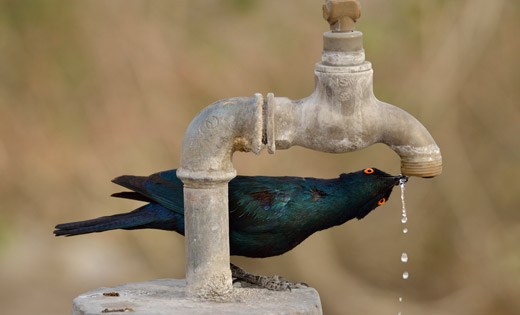 She explained: “I soon realised that what I regarded as wasteful was seen as an opportunity by several species of birds queuing up for a drink. When I saw my picture of this Cape glossy starling I realised this rather common species had stolen the show, as I could really appreciate the visual effect of its bright orange eyes.”

“It was calm, sunny and with the vivid colours of early morning. A group of pelicans on a tidal pond treated us to the spectacle of their morning fishing trip. This picture is my favourite because it came from a brief moment when one bird was separated from the group so I could photograph its reflection in the water, which reminds me of the beauty of this early morning,” she said.

Dr Bradter, who has won prizes in past BES photography competitions, believes that ecological knowledge is vital to her success. Advising aspiring ecologist photographers, she said: “Ecological knowledge will help you find habitats and species, and anticipate behaviour. Light and composition are very important, as is persistence. Understanding your camera is also vital, as it allows you to control the elements of an image and show your view of the world.”

Ute Bradter won £250 and her photographs were exhibited at the BES Annual Meeting at the Edinburgh International Conference Centre.