The work of the Leeds professor who developed one of the most influential scientific techniques of the 20th Century has been commemorated 100 years after he received the Nobel Prize. 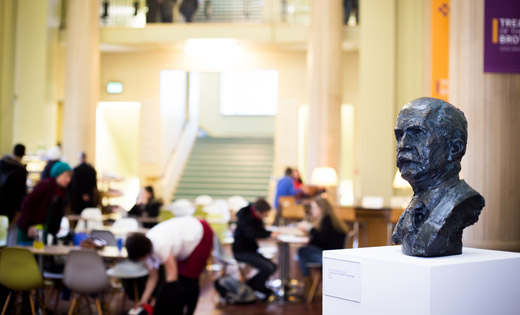 A bust of Sir William Henry Bragg, Cavendish Chair of Physics at Leeds from 1909 to 1915, who with his son William Lawrence Bragg won the 1915 Nobel Prize in Physics for the development of X-ray crystallography, has been unveiled in the University’s Parkinson Court.

Their research revolutionised science by allowing researchers to examine the atomic structure of materials in detail for the first time.

Sir Alan Langlands, Vice-Chancellor of the University, said: “Looking back at the century since the 1915 Nobel Prize, it is hard to exaggerate the significance of the Braggs' contribution.  At least 20 subsequent Nobel prizes in physics, chemistry and medicine, including Watson and Crick’s momentous work on the structure of DNA, relied directly on X-ray diffraction.

“The Braggs’ legacy is felt in all of our lives. The medical ultrasound device that produces pictures of your baby, the fuel injectors in cars, the SONAR used in submarines, to take just a few examples, all rely on materials developed using X-ray crystallography. Our knowledge of biology, chemistry, medicine, materials science, electronic materials, pharmacology and many other areas would be immeasurably poorer without them.” 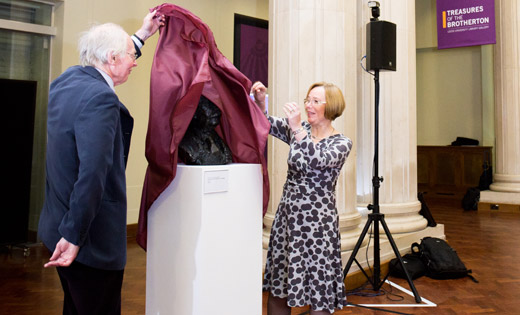 Professor Alan Watson, FRS Emeritus Professor in the Faculty of Maths and Physical Sciences and Professor Sheena Radford FRS, Astbury Professor of Biophysics and the Director of the Astbury Centre for Structural Molecular Biology, unveiled the bust of Bragg.

The new bust, a bronze cast by the Australian artist Robert Hannaford, has initially been installed in the University’s Parkinson Court, but is expected to be moved to the Bragg Centre, a new interdisciplinary research centre in engineering and the physical sciences recently approved by the University’s Council. An identical bust has been installed at the University of Adelaide, where William Henry Bragg gained his first professorship.

The crucial steps in the development of X-ray crystallography were taken in the physics laboratories at the University of Leeds in 1912-13.

Read more about this here.