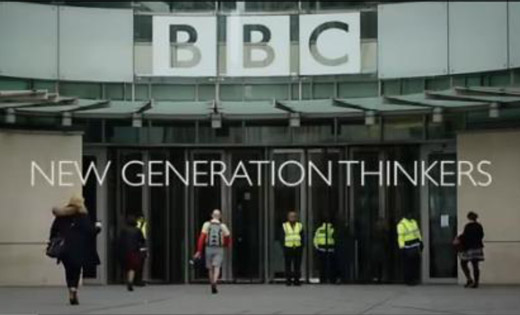 The Arts and Humanities Research Council and BBC Radio 3, are keen to hear from academics who are passionate about communicating their research and who are keen to develop their knowledge of radio and TV.

This exciting opportunity aims to develop a new generation of academics who can bring the best of university research and scholarly ideas to a broad audience – through BBC broadcasting. It’s a chance for early career researchers to cultivate the skills to communicate their research findings to those outside the academic community.

Each year, up to sixty successful applicants have a chance to develop their programme-making ideas with experienced BBC producers at a series of dedicated workshops.  Of these, up to ten will become Radio 3’s resident New Generation Thinkers. They will benefit from a unique opportunity to develop their own programmes for BBC Radio 3 and a chance to appear regularly on air.

To celebrate AHRC’s tenth anniversary year and five years of the New Generation Thinkers scheme, a film has been produced which follows the journey of NGT applicants. This short film includes useful tips and advice from successful NGT finalists including what to expect from the BBC-led workshops.

For more information on the scheme and details of eligibility and how to apply please see the AHRC website.  Applications are open until Thursday 7 January 2016.