Three students from the School of Media and Communication have excelled in the RTS (Yorkshire) regional Student Awards. 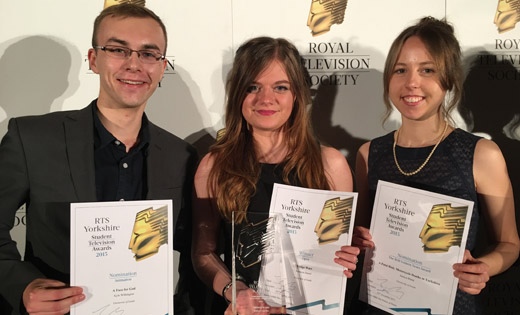 Rebecca Daniel, a Cinema and Photography student now in her third and final year at the University, has won first place for the ‘Open Category’ for an animation film she developed in her second year as part of John Edmond’s Motion Graphics module. The judges were impressed with the technical prowess in the short film about two children who fight for their drawing's space on the family fridge.

On receiving the award, Rebecca said: “I had no expectation to win as I knew the standards of the work of other nominees would be very high, I was just thrilled to be shortlisted! When I won the 'Open Category', I couldn't really believe it - the award means a tremendous amount to me as I worked tirelessly on the project, so it gives me confidence in myself and my work along with high hopes for the future.” 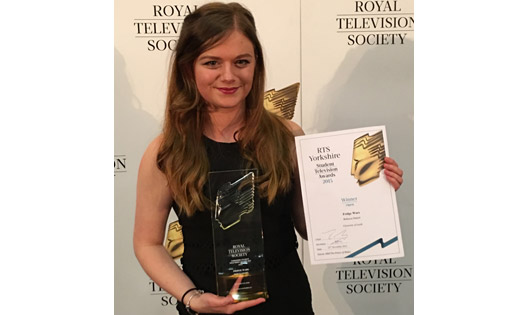 Rebecca Daniel with her award.

Bethany Klein, Head of the School of Media and Communication, commented: “We are delighted to see three of our students recognised by the Royal Television Society and given these prestigious accolades. It’s an honour which reflects both their personal achievements and the calibre of the work produced by students at our school.”

Each year, the RTS rewards excellence in student television with its Student Television Awards, holding ceremonies around the UK and Ireland to celebrate. Rebecca’s short film will now go onto the National Student Awards which will be in London in spring 2016. This is the second year that the Cinema and Photography programme will be represented in the prestigious national final. Last year, ‘Thick Skin’, a final year film project by students Despina Christodoulou and Rob Dalton, won the RTS National Award for Best Undergraduate Factual Film.

Read more about the awards.