Leeds University researcher bags the European Academy prize for the best research in rehabilitation in 2014. 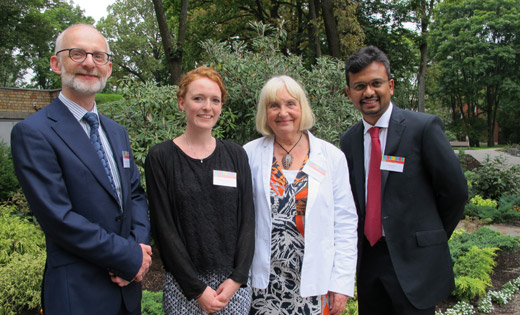 Manoj Sivan MD, who held the NIHR (National Institute for Health Research) Academic Clinical Fellow post in Rehabilitation Medicine (Leeds Teaching Hospitals NHS Trust and Leeds University) has been awarded the prestigious European Academy prize for his work on home-based rehabilitation robotic device (hCAAR) for enhancing arm recovery after stroke. The research work (MD degree) was undertaken within the academic departments of Rehabilitation Medicine and Mechanical Engineering in the University.

Stroke is the leading cause of adult onset disability worldwide, and annually, leads to 5 million people developing long-term disability. Only 50% of stroke survivors regain complete functional use of the affected arm. Robotic devices are being developed to help provide arm exercises to enhance the recovery of the arm. Most of the robotic devices developed so far have mostly been tested only in research labs and hospital setting.

The hCAAR device is the first assistive device that has been tested exclusively in a clinical study in a home setting. Stroke patients have used the device on their own without the constant supervision from therapists. The clinical trial published in the Journal of NeuroEngineering and Rehabilitation involved 17 stroke patients, who had used the device in their homes for a period of eight weeks. The study demonstrated improvement in arm function in some patients.

The research is likely to influence the future direction of research in rehabilitation robotics. As more and more care is now being moved out of hospitals to homes, this research will lead to development of more advanced technologies that can be used by patients independently in their homes, giving them greater control of their rehabilitation program.