Former Home Secretary and Secretary of State for Education, Lord Baker of Dorking, visited the University’s Engineering faculty to share his vision for Leeds UTC on 11 September. 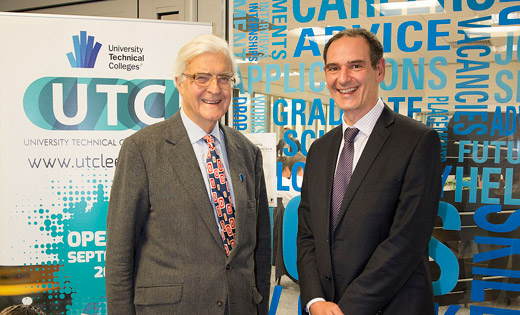 Lord Baker’s visit was part of an ‘Employer Engagement’ event in the School of Mechanical Engineering, which welcomed a number of representatives from industry who are key partners in the UTC, including Kodak and Siemens.

Lord Baker attended in his capacity as founder of the Baker Dearing Educational Trust, an organisation which has its focus on developing and supporting UTCs.

He was welcomed to the event by Martin Levesley, Pro-Dean for Research in Engineering, and Phil Ball, Chair of Trustees for the UTC and Managing Director of Kodak UK.

Simon Nadin, General Manager at Siemens, and Mark Kennedy, Principal Designate of the new UTC, also spoke at the event.

The Leeds UTC is expected to have an eventual total capacity of 600 pupils when it opens in September 2016. It will operate under the government’s academy schools programme and will offer traditional GCSEs and A levels with an additional focus on advanced manufacturing and engineering.